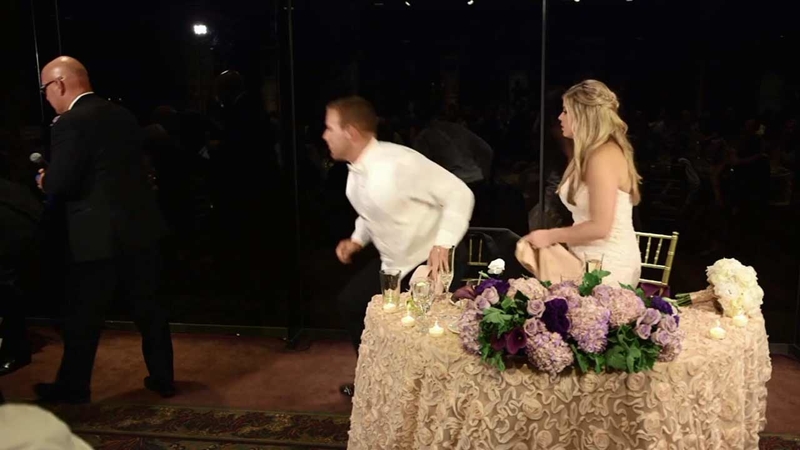 RANCHO SANTA MARGARITA, Calif. (KABC) -- It's a day Cody and Kelly Campbell will never forget. The couple became man and wife at a beautiful wedding in Orange County on Saturday.

"It was the most incredible day," Kelly said. "We had all of our friends and family there, and we couldn't have asked for a better night."

At the reception, Cody's father, Craig Campbell, a retired captain with the Orange County Fire Authority, gave an emotional best man speech, but before he could finish his toast an emergency occurred.

"I heard a couple people yell, 'My God, she's choking,'" Craig said. "I happened to turn over to the table over here and witnessed a lady that had a complete airway obstruction."

Before he could react, Cody, a rookie with the Los Angeles County Fire Department, jumped into action.

"Just went back on my training and just performed the Heimlich, and about five or six thrusts, a piece of meat became dislodged from her throat," Cody said.

The woman, a relative of Kelly's in her 60s, sat down and began to breathe normally. She thanked Cody for saving her life, then the reception continued.

The rescue was so unbelievable that some guests thought this family of first responders had planned it.

"Some people in the back, who really couldn't see this far ahead, truly thought that it might have been staged, but I assure you, I am not an actress, that was not faking it," Kelly said.

While the newlyweds never could have expected this, the Campbells said it made their big day all the more memorable.