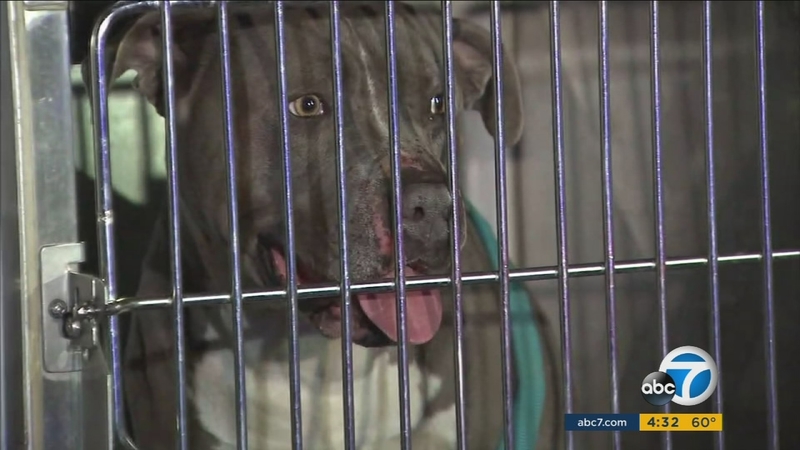 LINCOLN HEIGHTS (KABC) -- A 76-year-old man was in critical condition and his pet Pomeranian died after they were attacked by two pit bulls Thursday in Lincoln Heights.

Firefighter-paramedics responded about 5:44 p.m. to the 2600 block of Lincoln Park Avenue and transported the man to L.A. County-USC Medical Center, according to the Los Angeles Fire Department.

His family identified him as Valentine Herrera, a father of three and grandfather of seven. He remained unconscious Friday afternoon after suffering head trauma and bite wounds.

"He had internal bleeding on his brain," said Luis Herrera, the victim's son, adding that he did not know if that injury was "because of a fall ... or the dogs pulled him down."

The 76-year-old's dog, named Dodger, was mauled to death.

An officer seized two pit bulls and was searching for records of possible previous incidents. According to the Los Angeles County Department of Animal Care and Control, the two pit bulls were unlicensed.

Neighbors who live near the home of the pit bulls' owners said they have feared being attacked.

"They'll rush up to the gate and they'll hit on the gate, bite on the gate - whatever they could do," said resident Victor Perez.

Neighbor Frank Carrasco said he was shocked by the inaction of the pit bulls' owner after Herrera fell to the ground.

"It got me mad because he didn't go even help the man on the ground - at all," Carrasco said.

A disabled woman, who declined to be interviewed on camera, lives on the same property as the pit bulls' owners, who declined to comment. The woman said the dogs were her "security," a defense against intruders who invaded the yard to steal fruit from its trees.

At the time of the attack, Herrera had already experienced health challenges. He was on dialysis and had a heart condition. He was stricken in a medical episode last November.

Loved ones are maintaining a vigil at the hospital.