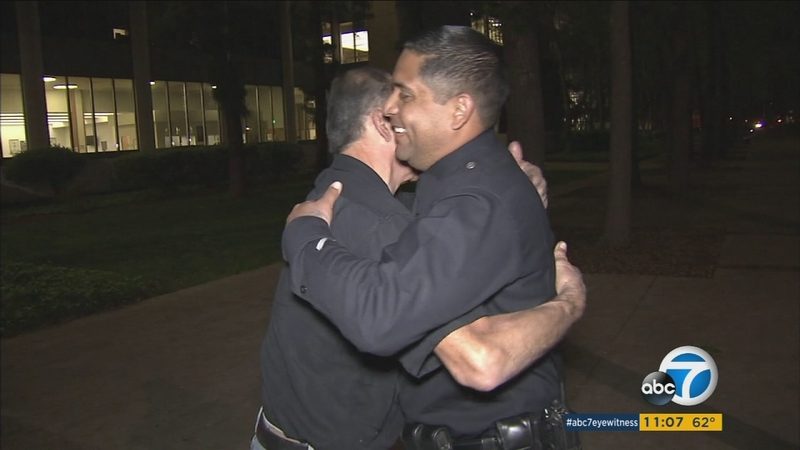 VAN NUYS, LOS ANGELES (KABC) -- A man got to meet the off-duty Los Angeles police officer who pulled him from a burning vehicle following a deadly chain-reaction crash on the 5 Freeway in Commerce.

Javier Gonzalez Jr. narrowly escaped death from a fiery inferno in February thanks to the quick actions of LAPD Officer Ortiz.

Investigator said two drivers street racing hit a UPS big rig, causing it to go airborne and crashing in a ball of flames.

The truck crushed several vehicles, including Gonzalez's SUV. Two teenagers were killed along with the driver of the UPS big rig.

Gonzalez was trapped in the burning wreckage.

"I thought I was dead, I figured that's it. I figured I'd be crushed and the people who didn't make it were right next to us," Gonzalez recalled. "I was panicking, kicking the glass because I could feel the flames getting hotter. It was getting hot quick."

Ortiz was on his way home from Disneyland when he saw the scene and didn't think twice about jumping into action.

Gonzalez said Ortiz's quick decisions saved his life, because a moment after being pulled from the fiery crash, the two heard another explosion.

"He heard me kicking. When he pinpointed where the noise was coming from he just with lightning speed came running, pulled the window open, got me by my arms, pulled me out and sat me by the center divider. Soon after that we heard another massive explosion," Gonzalez described.

Ortiz doesn't like the title of "hero," because he said he was simply doing what any officer would have done in that moment.

"I just did what hopefully somebody else would do for me if I were stuck in the car," Ortiz said. "I don't usually think about it. We just do it. It's what we're paid to do."

Though Ortiz may downplay what he did, Gonzalez calls him his angel and said he will never forgot what he did for him.

"You risked your life. Everybody ran away and he ran in," Gonzalez said. "Saved my life and risked his, he's definitely a superhero."

Ortiz, who has been on the force for seven years, also helped another victim who was severely burned in the crash.

While his actions were heroic, Ortiz said he doesn't want any recognition, but his commanders have recommended him for the department's medal of valor.
Related topics:
city of commercevan nuyslos angeleslos angeles countytraffic fatalitiesherolapdi 5
Copyright © 2021 KABC-TV. All Rights Reserved.
More Videos
From CNN Newsource affiliates
TOP STORIES