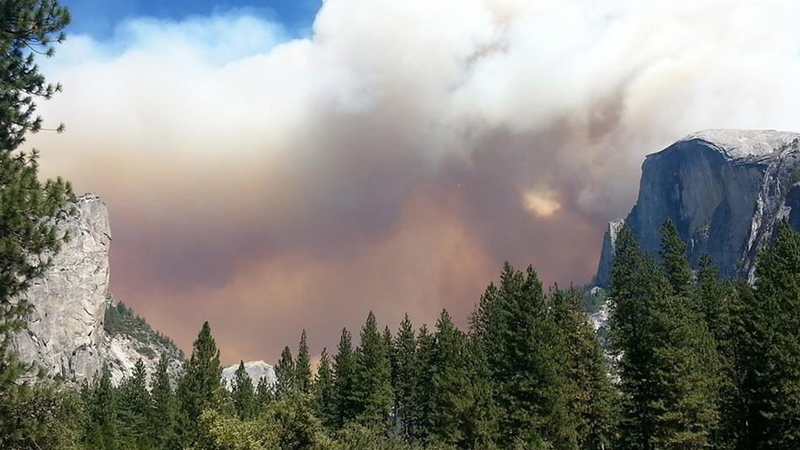 YOSEMITE NATIONAL PARK, Calif. -- Crews continue to battle a wildfire in Yosemite National Park. The fire has now burned at least 700 acres in the rugged terrain near Half Dome, according to park officials.

There are no reports of injuries or structures affected by the flames. Most of the national park remains open, including all of the roads.

Nearly 100 hikers have been picked up by search-and-rescue helicopters, and there may be many more as they search into the night.

"I mean it was brilliant," said Mark Fidler, a hiker. "I mean hopefully nobody's been hurt by the fires or anything, but honestly you can't get that kind of experience getting helicoptered off the top of a mountain."

Rescue crews have been flying around the clock to get people away from a fire that's burning out of control. It's forced the closure of Half Dome -- a major tourist attraction -- and created a plume of smoke that could be seen for miles.

"There's no helicopter rides in Yosemite Valley so you either have to be injured or need a rescue so that was really interesting," said Delaware North Companies spokesperson Lisa Cesaro, who was hiking on Sunday. "It was amazing. You could see Half Dome, you could see the flames and the smoke from the fire. I will definitely remember it."

Many of the rescued were in sheer amazement. But loved ones of those climbers waited anxiously for helicopters to land, like David Frost who's fiancee and other family members were hiking just as the fire erupted.

"I don't know if they're dead or alive, you know, I've got to find out," said Frost.

The cause of the quickly moving fire is still unknown, but it's right next to a fire that's been smoldering since July -- quite possibly the cause.

Search-and-rescue crews don't know how many people are in the mountains and can't fly during the night. But it's very clear the first responders are doing everything they can to get every hiker home.


Trails near the Half Dome area, the Little Yosemite Valley area (a backcountry camping area near Half Dome), Merced Lake and Sunrise High Sierra Camps, Clouds Rest and Echo Valley have been shut down.

Visitors can also call the fire information line before heading into the park. That number is (209) 372-0327.