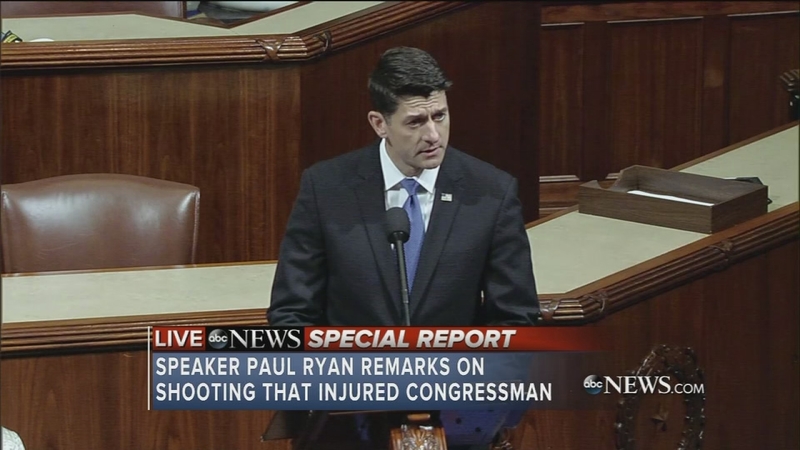 ALEXANDRIA, Virginia -- As soon as news broke of the shooting at a GOP baseball game in Alexandria this morning, politicians and celebrities turned to social media to express shock and prayers for the victims.

At least four people were shot during the GOP congressional baseball game, including Republican Majority Whip Rep. Steve Scalise, a congressional staffer, and two members of their security detail.

President Trump released the following statement from the White House:

Rep. Steve Scalise of Louisiana, a true friend and patriot, was badly injured but will fully recover. Our thoughts and prayers are with him.

The Vice President and I are aware of the shooting incident in Virginia and are monitoring developments closely. We are deeply saddened by this tragedy. Our thoughts and prayers are with the members of Congress, their staffs, Capitol Police, first responders, and all others affected.

Republican Florida Senator Marco Rubio offered his prayers for Scalise and those injured in Twitter:

My thoughts & prayers are w/ Rep. Scalise, staff, and all others affected by this horrific incident in Virginia.

Former U.S. Rep. Gabrielle Giffords, who was shot while meeting constituents in her Arizona district in January 2011, tweeted this statement:

My heart is with my former colleagues, their families & staff, and the US Capitol Police- public servants and heroes today and every day.

The suspect, James T. Hodgkinson, appeared to be have volunteered for Democratic Rep. Bernie Sanders of Vermont during the 2016 presidential campaign. Sanders condemned the shooting.

Sen. Bernie Sanders spoke out after learning the gunman had apparently volunteered on his presidential campaign.

Here is a look at the other statements of support:

Thank you to the first responders who rushed in to help protect those who were hurt in Alexandria, VA. My thoughts & prayers to everyone!

Reports that my former House colleague @SteveScalise has been shot and others injured as well. Praying for them and their families. https://t.co/w0jI7shHX1

My thoughts and prayers with @SteveScalise, Capitol Police and staff at the shooting in Alexandria, VA this morning.

Horrified by shooting in Alexandria. My thoughts are with @SteveScalise, my colleagues, staff members, and police who were attacked this AM.

My thoughts and prayers are with my colleague, Steve Scalise, and the Capitol Police and staff shot today at a ballpark. Awful news.

Praying for @SteveScalise, his staff and @CapitolPolice. Thank you to our @CapitolPolice officers who protect us each and every day.

Rep. Mo Brooks on CNN now: says he was on deck at practice, hears gunshots. Says he saw a rifle. Heard Scalise screaming. He was shot.

Prayers for Steve Scalise and others that were shot this morning. May God continue to watch over you.

I'm horrified by the act of violence against Majority Whip Steve Scalise and several others this morning. Please... https://t.co/9ISHrnSxAk

My thoughts and prayers are with my colleague @SteveScalise, the Capitol Police and staff at the shooting in Alexandria, VA this morning.

Horrified to hear of attack in VA—My thoughts are w/ my colleagues, their staff & Capitol Police, as we continue to gather more information.