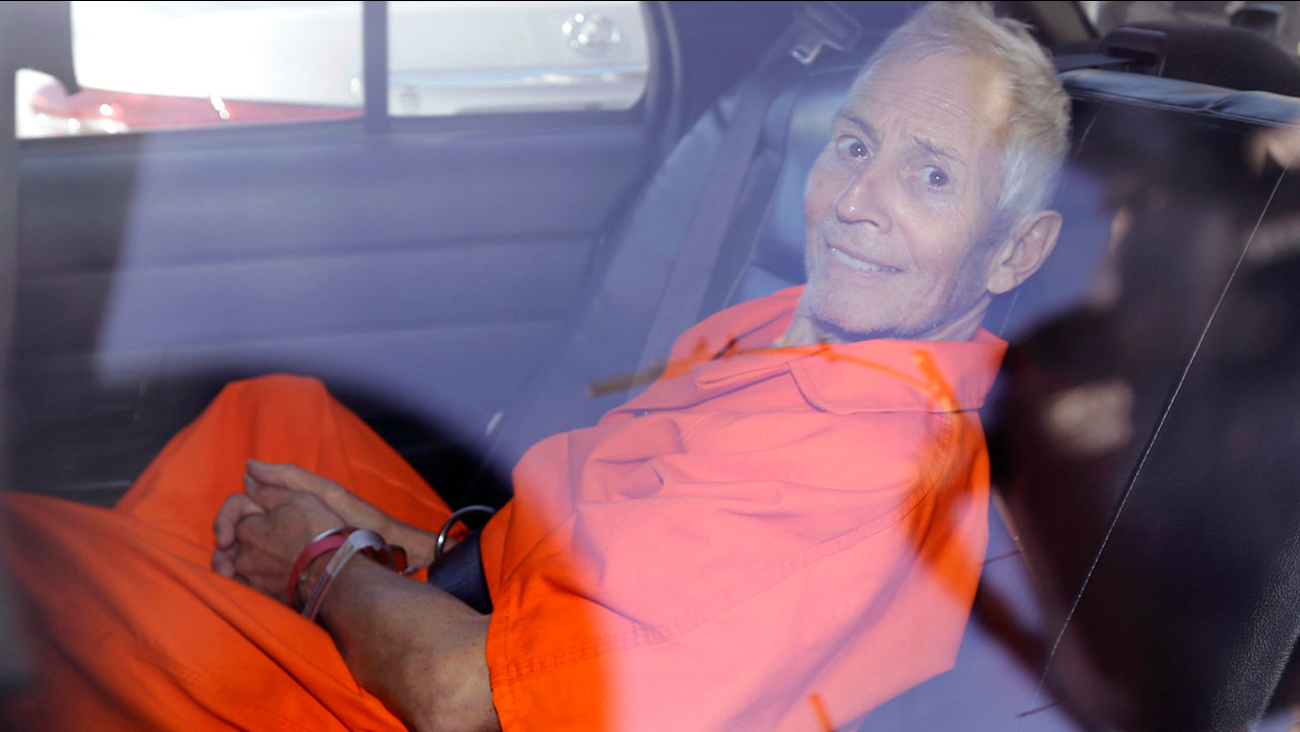 NEW ORLEANS -- A New York real estate heir pleaded guilty in New Orleans on Wednesday to a weapons charge and agreed to an 85-month prison sentence, a move that could usher in his extradition to California to face murder charges.

U.S. District Judge Kurt Engelhardt said Wednesday that he would provisionally accept the plea from Robert Durst, 72. The judge said he will make a final decision after he receives a pre-sentencing report, expected in two weeks.

Durst, who appeared in shackles and an orange prison jumpsuit, admitted he illegally carried a .38-caliber revolver after being convicted of a felony.

The charge stems from Durst's arrest at a hotel in New Orleans last year by FBI agents who feared he was about to flee the country. A weapon was found at the time of Durst's arrest. He was also found with $117,000 in cash, which he will forfeit under the plea deal.

Durst was charged last year with the 2000 death of his friend Susan Berman after mumbling that he "killed them all" during the taping of an HBO documentary. His lawyer, Richard DeGuerin, says Durst did not kill Berman.

The deal is another step toward getting Durst back to California to face trial in Berman's death. If Englehardt accepts the plea, prosecutors in Los Angeles have agreed to arraign Durst by Aug. 18, assistant U.S. attorney Michael McMahon told the judge.

"This agreement has a lot of moving parts and a lot of jurisdictions. What we're doing and have been trying to do from the start is get Bob Durst to Los Angeles," defense attorney DeGuerin said after the hearing. "Bob Durst did not kill Susan Berman, does not know who did, and wants to prove it."

Although Durst waived extradition from the start, he will remain in Louisiana at least until after his sentencing. If the judge accepts the sentence, then it is up to the Bureau of Prisons to decide where Durst will serve it, though Englehardt can recommend a prison.

DeGuerin told the judge he will ask for the Terminal Island prison because it's close to Los Angeles.

The plea bargain will be nullified if the judge gives Durst a different sentence, McMahon said. The maximum penalty that Robert Durst could have faced was 10 years in prison and a $250,000 fine.

An estranged member of the wealthy New York real estate family that runs 1 World Trade Center, he's accused of killing Berman to keep her from talking to New York prosecutors about the disappearance of Durst's first wife, Kathleen, in 1982.

FBI agents tracked Durst to a New Orleans hotel on the eve of the finale of "The Jinx," HBO's six-part documentary about Durst, his wife's disappearance, Berman's death and the death and dismemberment of Durst's neighbor Morris Black in 2001. Durst was formally arrested early on the day of the broadcast.

The previous felony that is part of Durst's plea was a 2004 plea in Pennsylvania to possessing a weapon both while under indictment for Black's death and doing so while a fugitive on the murder charge.

He ultimately testified that he killed Black in self-defense, and was acquitted of murder.
Related topics:
louisianalos angelesweaponssentencingu.s. & worldrobert durst
Copyright © 2021 by The Associated Press. All Rights Reserved.
More Videos
From CNN Newsource affiliates
TOP STORIES