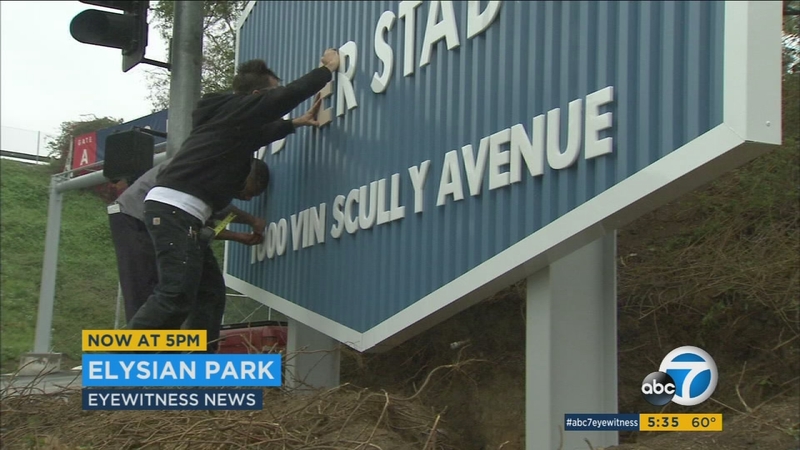 Scully has been the voice of the Dodgers for 67 years, dating back to the team's time in Brooklyn and giving him the record for a sportscaster's tenure with one team. At 88, he has said this is his last season.

The council unanimously approved changing a stretch of Elysian Park Avenue from Sunset Boulevard to Dodger Stadium in honor of Scully.

The official naming ceremony is scheduled for Monday at 11 a.m., one day before the Dodgers home opener, though the stadium's new sign has already gone up.

A handful of stadium neighbors, however, were not happy with the name change, seeing it as disrespectful to the historic Elysian Park Avenue name.

"The council members should be ashamed, ashamed at using the legacy of Vin Scully to blot out Elysian Park," said Ari Bessendorf, a member of the Echo Park Dodgers advisory board.

Some rejected the symbolism of the stadium taking over the neighborhood.

But City Councilman Gil Cedillo, who proposed the renaming, shrugs off the complaints, noting that the name Elysian Park is still prominent in the area and that improvements have been made along the avenue like new palm trees and landscaping.