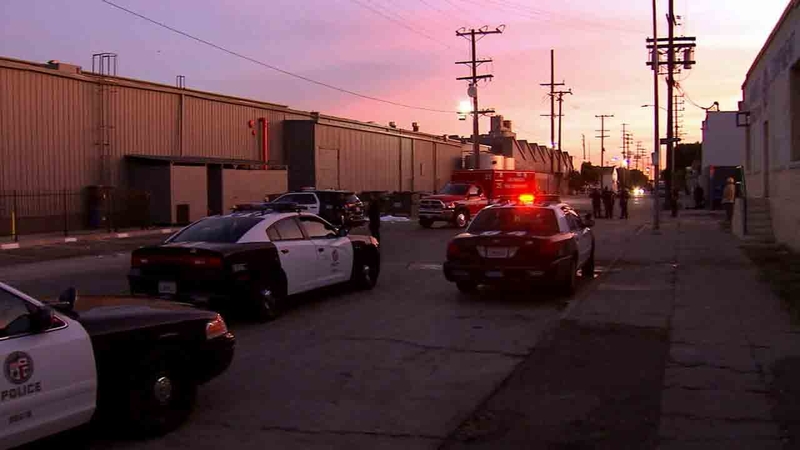 BOYLE HEIGHTS, LOS ANGELES (KABC) -- A 19-year-old teen who was trying to recover his stolen car by clinging to the hood was thrown off and killed when the suspect crashed into a Boyle Heights business Sunday. The car then caught fire.

The bizarre series of events began near the intersection of Evergreen Avenue and 11th Street.

The victim, identified as Oscar Perez, and his brother were traveling in a Nissan when a 16-year-old boy driving a Toyota Rav 4 accidentally backed into them and took off. The brothers then chased after the driver.

The suspect, who later told police he was scared because he was unlicensed, lost control and crashed into a pole as he turned onto Pico Boulevard from Lorena Street.

Perez and his brother jumped out of the Nissan, which they left running, to confront the driver. As the two parties exchanged information, an unknown person jumped into Perez's Nissan and began to drive off.

"One of the vehicles was left running and unoccupied, and another individual jumped in that vehicle and proceeded to leave the location," LAPD Cpt. Gary Lopez said.

That's when Perez jumped on the hood.

"As that occurred, the owner of the vehicle, as our understanding, jumped on the hood of the car to try and stop the individual from taking the vehicle," Lopez said.

Police say the suspect sped off at a high rate of speed along Pico Boulevard, swerving back and forth to try and get Perez off of the vehicle

"There was a black car, and he was dragging a boy, apparently a young man trying to stop the car as they were making a turn, so they were coming at pretty much a high speed," witness Sergio Espinoza said.

The suspect then crashed into a loading dock at Pico Boulevard and Esperanza Street at about 3:50 p.m. Perez was pronounced dead at the scene.

The suspect was transported to a local hospital in critical condition. He was expected to be booked upon his release.

Family members say Perez worked at a corner market to pay for the car he treasured. The crash is now being investigated as a homicide.