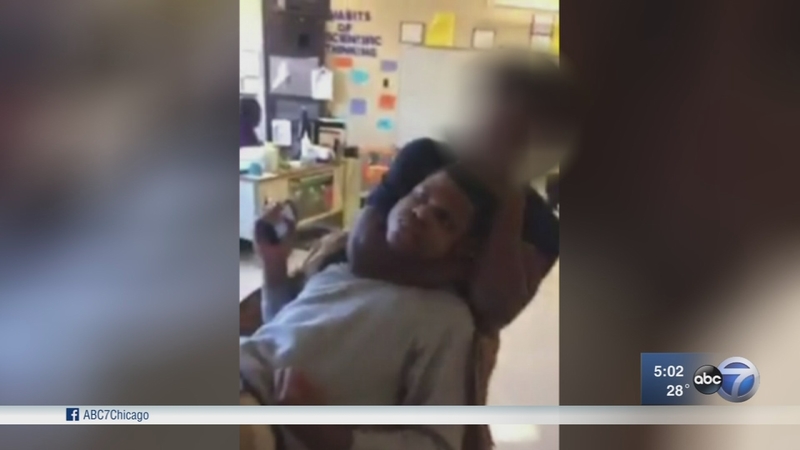 CHICAGO -- A mother is outraged after seeing a video of her 16-year-old son being choked by a classmate until he passes out while a teacher was present in his science class at a Chicago Public Schools high school.

Latanya Sombright said she was never notified of the incident until she saw video posted on Facebook.

When Antonio Clinton first showed his mother the cellphone video being choked to the point of passing out, she was furious.

The incident happened last Thursday, Feb. 2, at John Hope College Prep High School on the South Side. Antonio said a student came up to him from behind in science class and choked him. Within seconds, he passed out. Students are heard laughing in the background.

Also in the background is someone sitting at a desk. Antonio said it was a substitute teacher.

"The teacher, she didn't do nothing. She was just sitting at her desk, looking down. She wasn't paying attention to us," he said.

He said the teacher ignored the entire incident.

"I was angry because my child could have died in his class and nobody would know. Nobody called me that day to notify me or nothing," Sombright said.

She said school administrators learned about the incident only after she took the video to school Monday.

"And I never heard from the principal until I called the network on, that's Tuesday, yesterday, and that is when he called," she said.

The principal told Sombright the incident is under investigation. Sombright said she sent her son to Hope because she thought it was a better and safer school than their neighborhood high school. She is keeping her son at home until they find a new high school for him to attend.

"Chicago Public Schools has barred a substitute teacher from working in the District after learning that the substitute did not appropriately address or report a serious student safety incident. CPS is committed to providing all students with safe learning environments where they can thrive, and there is absolutely no place at CPS for adults who do not support students," the statement said.