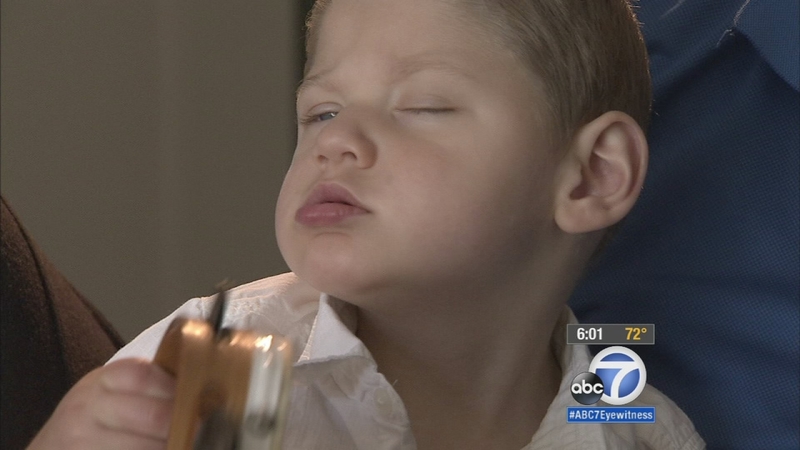 WINNETKA, LOS ANGELES (KABC) -- A Winnetka couple is set for a criminal trial Wednesday hoping it will deliver answers about their brain-injured baby.

Two-year-old Calin Samora cannot see and has a range of other disabilities.

Doctors say that Calin was a normal baby until he was 3 months old. Then came the emergency at his home while under the care of a nanny. They were down the hall from Lori Samora who was on a business call.

"She said, 'Lori, it is an emergency,'" recounts Samora.

Calin was limp, bleeding from the nose and gurgling. At the hospital, doctors discovered his brain was bleeding, but there was not a bump or bruise on Calin's head.

"They didn't use the word, 'shaken baby,' but they said they would call the police and we would talk to them about how it happened," said his mother.

The couple's nanny, 34-year old Monica Rezonable, was charged with felony child abuse. A preliminary hearing is set to begin Wednesday. Lori and Gilbert Samora say they want to know the truth after Rezonable gave them different stories. Among them that Calin's sister hit him. Then that she sat on him while on a motorized swing. Then that she slipped and his head hit the floor.

Rezonable's lawyer, Sharon Beth Marshall, cautions against a rush to judgement saying in a statement:

"This was an accident, which is the antithesis of a crime and the evidence at preliminary hearing will so show."

Medical bills meantime have busted the budget of the young family. At one point, Lori Samora lost her job in a recruiting firm, and Gilbert Samora in heavy equipment sales was laid off for a month.

The couple is now making a public plea with a GoFundMe account, and they are seeking new therapies. But the dreams for their son are destroyed.

"The sports he could have played. Holidays. He will never see Christmas lights or blow out a candle," laments his mother as tears tumble.

Gilbert says the financial and emotional load can feel overwhelming. Then he looks at his son.

"That smile. That's my hope. Him and my daughter," he said.

If you would like to make a donation to the GoFundMe account, click on this link: http://www.gofundme.com/ud5qqe4k.
Related topics:
winnetkalos angeleschild abusetrialbabycourt case
Copyright © 2021 KABC-TV. All Rights Reserved.
More Videos
From CNN Newsource affiliates
TOP STORIES