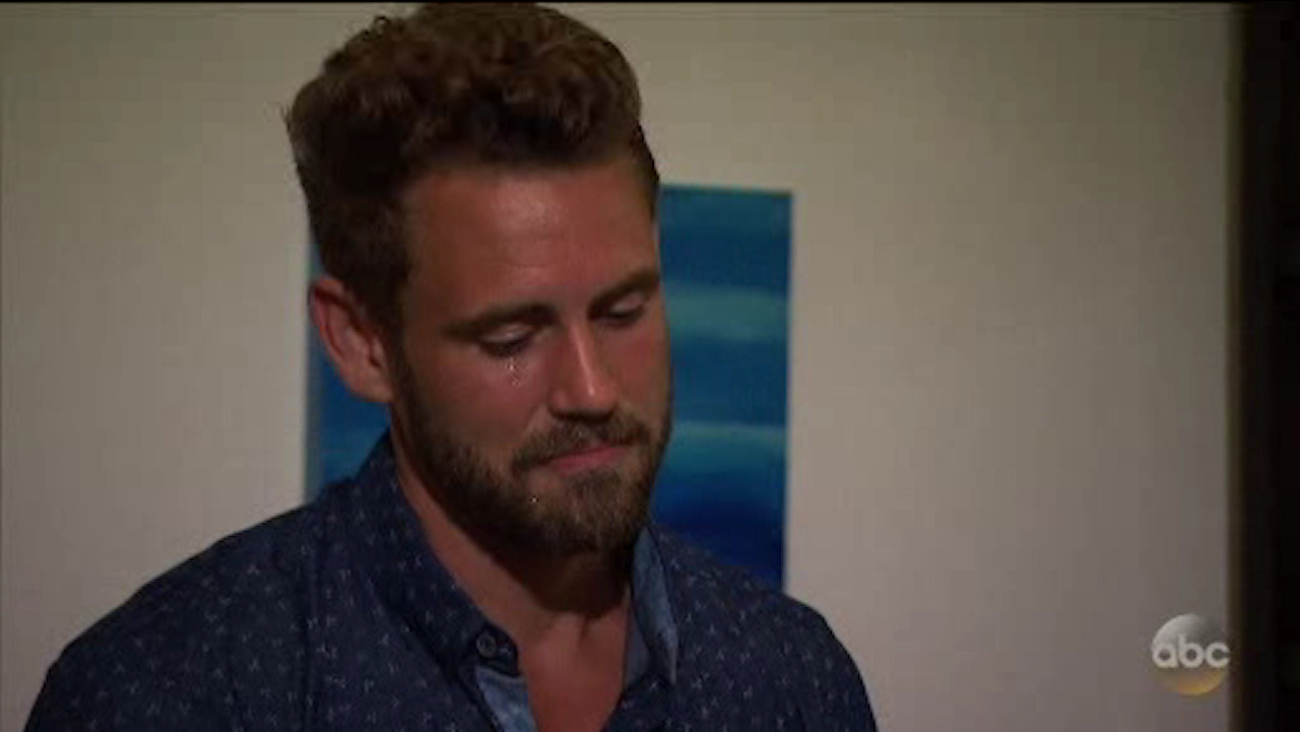 NEW YORK -- Tonight began with Taylor storming into Corrine and Nick's romantic second half of their date. Nick agrees to talk to Taylor, which really, it would have been fairer to Corrine not to. They were in the middle of their date, and Taylor is coming off like a sore loser. Taylor said that Corrine "flat out lied" to him. Corrine meantime, sat at the table and was horrified at what was going on. Nick re-entered the room and he told Corrine he made his decision on what his heart was feeling and he still sees potential in their relationship. Corrine lives on!

Just like that, it's time for another rose ceremony. The ladies arrived by horse and carriage to a mansion where Chris Harrison greeted them. He told them that there would not be a cocktail party, they were going right to the rose ceremony.

That meant that Jaime and funny ladies Josephine and Alexis were going home. I think we may see these ladies, or at least one or two, in "Paradise." Nick then announced that they were all headed to St. Thomas!

Kristina got to fly off in plane with Nick, leaving the other ladies behind to explore St. Thomas. Of course, Jasmine started crying. That girl has been holding on by a thread. I hope she gets a date soon or she's going to have a mental breakdown. Kristina and Nick landed and they had some beer while they tried to talk about her background and her previous life in Russia. There seemed to be a bit of a communication breakdown due to the language barrier, but we'll see if they can get through it.

At the hotel a housekeeper arrived, and Corrine was very excited that they had a "nanny" to help them with everything. This poor lady "Lorna" has no idea what she's in for. Corrine is putting her to work! 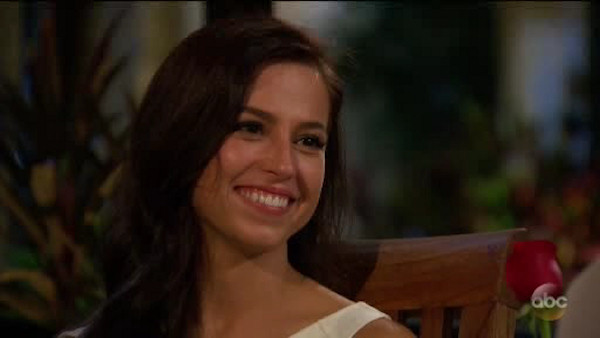 As evening fell, Kristina and Nick headed to a private dinner. Kristina told Nick that she was very poor and being so hungry she ate lipstick. She said that her mom told her to get out when she broke a rule about not eating anything all day because they were so poor and couldn't afford food. She spent eight years or so in an orphanage and then moved to the United States as a young teen where she was adopted. She said it was very hard to leave all of the other kids behind, and Nick was just blown away by her past. She said that her adoptive father was waiting at the airport with balloons and flowers and it was the start of a great life. I'm so glad that things turned out well for her! With that, Nick offered her the date rose and she accepted! Then they danced the night away to a steel drum orchestra. It was very romantic!


The date card arrived back at the hotel and read, "Rachel, Raven, Vanessa, Corrine, Danielle M., and Jasmine, Life's a beach." That meant that there would be another two-on-one date with Danielle L. and Whitney! Wow!

The group date ladies arrived at the beach to meet up with Nick. They all boarded a catamaran and headed into the water. They eventually arrived at a private beach where they played some outdoor games and sipped on mixed drinks. Corrine got wasted on the date, and Nick just kept chasing after her despite her non-involvement. Jasmine started to lose it and got ultra-competitive. She even shoved Corrine! Vanessa also started to cry and say that she's been very patient but she's pretty much over this whole process. Then Danielle M. started to cry! They all felt like this stupid volleyball game was a big waste of time! Nick even said that his idea of a relaxing fun day was just not happening.

Once the disastrous volleyball game was over, Nick attempted to regroup by talking to the ladies. He said that he wanted to have quality time with each of them. Rachel kind of scolded Nick and told him, "I've told you multiple times I don't like group dates." I mean, that's part of the show! Nick tried to tell her that the way she was feeling was normal and he wants her to just hang on. 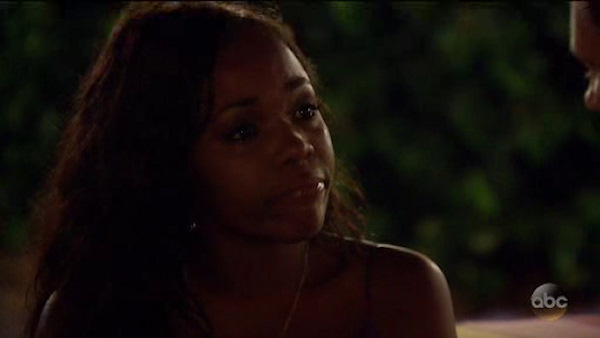 Nick kept taking the girls to talk one-by-one, and pretty much left Jasmine for last. She got very angry! It was at last her turn! Jasmine immediately laid into him about why she hasn't had her chance yet and has been overlooked. She even started to cry. Nick asked her how he thought their conversations have gone, and she said that they were "great." Clearly it seems like he feels otherwise. When she told him, "I want to choke you so bad," it made extremely uncomfortable. She said that multiple times! He said that he appreciated her pouring her heart out, but he felt it would be best if he said "goodbye." Jasmine was so focused on the amount of time she was getting that she never used their "time" to develop the relationship, only to create an issue.

Next up, the dreaded two-on-one date! Danielle L. and Whitney arrived to a remote area in a helicopter. Whitney got her time first and Nick told her that she calms him and has a sweet aura about her. Nick told Danielle L. that their chemistry is off the charts and he was just looking for further clarity. He went back to Whitney and told her that he likes her a lot but he just can't give her the rose. Whitney told him that it's easy to feel deeper when you have spent more time with the other person. She asked him if Danielle was ready for a relationship? Nick fired back that it isn't about Danielle, it's about her. They hugged and then he took off in the helicopter with Danielle L. leaving Whitney on the beach all alone.

Nick and Danielle L. landed at a fort turned prison where they took a walk by lantern light through the tunnels of the sprawling estate. They sat down at a table together and talked about how their relationship has really flourished over the past few weeks. Then Danielle L. revealed that she is falling in love with Nick. Nick looked at her sadly and then told her that his heart feels differently. With that, their relationship ended and Nick walked her to a waiting SUV. That's terrible! To tell someone you love them and for them to be like, hm, no thanks.

After his terrible two-on-one experience, Nick showed up to talk to the remaining women at the hotel. He told everyone that he sent both girls home. He revealed that he was very optimistic about his relationship with Danielle L. and now he's worried that he might feel the same way with all of them. He's afraid that they are falling in love with him and it might not be happening for him and he's scared. So he said he wasn't sure if he could "keep doing this" and he walked out crying. So the ladies were sitting there like, now what?
Related topics:
arts & entertainmentabcthe bachelornick viallcominguproseschris harrison
Copyright © 2022 KABC Television, LLC. All rights reserved.
COMINGUPROSES
Clayton and Susie 'never say never' to a future 'Bachelor' appearance
Clayton's journey ends with an unexpected twist on 'The Bachelor'
Rachel and Gabby will both be 'Bachelorettes' on the same season
Gabby, Rachel endure 'Bachelor' Clayton's 'Rose Ceremony From Hell'
TOP STORIES
Heat prompts concern as Jurupa Valley brush fire chars 110 acres
CHP investigating possible 110 Freeway shooting in South LA
West Covina police investigating after dead body found outside Vons
More protests held in downtown LA amid fury over Roe v. Wade reversal
New gun store in Burbank causing uproar with some residents
OC coyote that attacked 2-year-old caught and euthanized
LAPD officer who died was beaten in training, mother claims
Show More
Biden signs landmark gun measure, says 'lives will be saved'
Newsom, California lawmakers reach tentative deal on gas tax rebate
Man arrested in connection with vicious attack in Koreatown
Trudeau: US abortion ruling could mean loss of other rights
Hearing set for teen accused of killing, sexually assaulting girl, 10
More TOP STORIES News