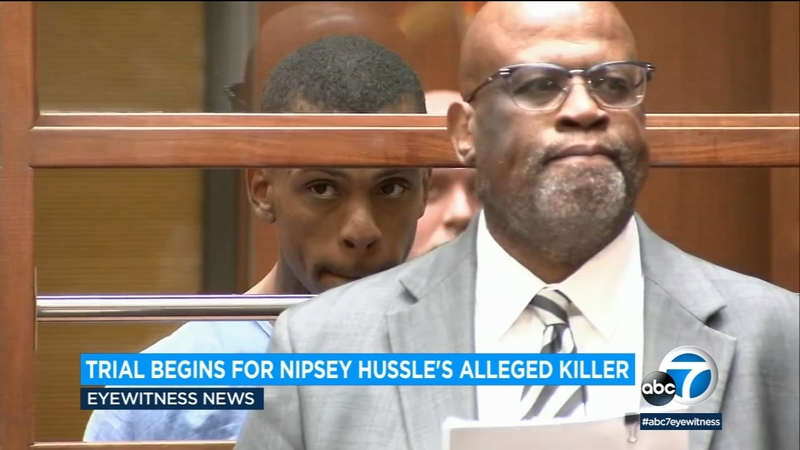 LOS ANGELES (KABC) -- The murder trial of the man accused of gunning down rapper Nipsey Hussle has begun in Los Angeles after a more than a three-year delay due to the pandemic.

He's been charged with first degree murder, two counts of attempted murder and several other charges in connection to the shooting death of Hussle in March 2019.

Hussle, whose real name is Ermias Asghedom, was shot and killed outside of his clothing store at Slauson Avenue and Crenshaw Boulevard just minutes after speaking with Holder.

Fiset said a three-year wait for trial isn't unusual, though, and may have given both sides more time to better prepare their case.

But she adds that the first degree murder charge against Holder will require prosecutors to convince the jury that the shooting was premeditated.

"I believe there was a six-minute delay between [Holder] talking, leaving and coming back," said Fiset. "That could be considered the premeditation for a first degree murder charge."

The rapper's death was a serious blow to the South Los Angeles community, where Hussle grew up and where he was well-respected, not only as an artist, but as a businessman and philanthropist.

After his death, fans packed a celebration of life event held at Staples Center.

Holder was once considered to be a friend of Hussle's.

Investigators said he used two handguns to shoot the rapper at least 10 times.

He was rushed to a hospital where he died a short time later.

Two other men were also wounded in the shooting. Holder was arrested in Bellflower two days later.

Jury selection recessed Thursday morning and is slated to start up again on Monday, June 6.

The trial is expected to last about a month. If convicted, Holder faces a maximum sentence of life in prison.