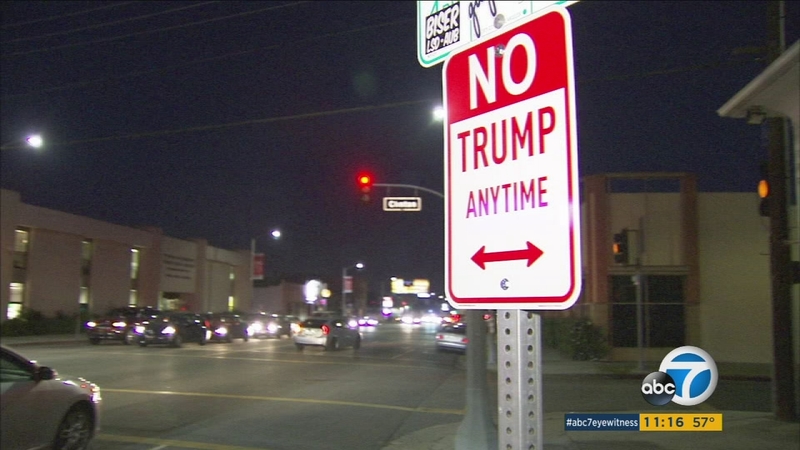 LOS ANGELES (KABC) -- There's a new parking sign popping up around town that's really turning people's heads. A street artist is behind the provocative and political works, which read "No Trump Anytime."

A street artist known as Plastic Jesus is at it again. He is behind such works as a heroin-using Oscar statue and the "No Kardashian Parking Anytime" signs. He has now created the "No Trump Anytime" signs.

"I think it's hilarious. I hope people notice it because it's kind of like a normal street sign," said a passerby.

There are 20 in all in New York, Washington, D.C. and in Los Angeles.

There are four such signs posted in L.A., including one near La Brea Avenue and Clinton Street in the Melrose District.

So why did the street artist create these Trump signs?

"I think the whole concept of Trump getting elected possibly as the president of the U.S. will have huge consequences, negative consequences across the country," said Plastic Jesus, who wanted remain anonymous since it's illegal to attach art to public property. "As a street artist, you want to get your message out there in the way you best know."

The artist is currently working on a piece that he says is about corruption in soccer and FIFA.

"That's taken nearly six months to produce but should be ready in a couple of weeks," he said.