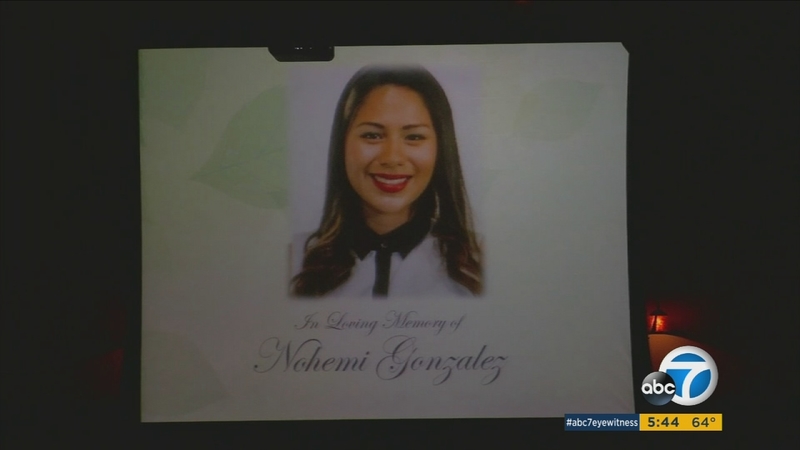 DOWNEY, Calif. (KABC) -- Nohemi Gonzalez, the California State University, Long Beach student who was killed during the attacks in Paris last month, was remembered by her friends and loved ones at her funeral on Friday.

Several of those who shared their memories of Gonzalez described the 23-year-old as a shining light, including the pastor of the church she used to attend and her former track and cross country coach.

Dan Whittington of Whittier High School recalled that Gonzalez always encouraged her teammates, and sometimes even her opponents.

"Even though she is no longer with us, our memories of her will never be forgotten," Whittington said. "She has made a positive impact on this world and the people she came in contact with."

Assembly member Roger Hernandez, who represents Gonzalez's hometown of El Monte, said her bright personality and strong work ethic represents not only her city, but the entire Hispanic community.

El Monte Mayor Andre Quintero said he felt many similarities between his life and Gonzalez's, as he crew up in El Monte as well. He said he wants his own daughter to be fearless and confident, just like Gonzalez.

Gonzalez's father said his "baby, my little princess, my pocahontas" never had any enemies, and that "she never saw colors" of people.

"She looked at life a very different way than many of us," Reynaldo Gonzalez said through a translator. He said he is so proud of her, and that he is still picking up the pieces of his broken heart.

Gonzalez's funeral was held at Calvary Chapel in Downey, 12808 Woodruff Avenue. The university awarded Gonzalez's bachelor degree to her mother.

Gonzalez was one of the 130 victims of the coordinated gun-and-suicide bombing attacks on Nov. 13.

The industrial design student was in Paris attending the Strate College of Design as part of a semester abroad program. She was eating dinner with friends at a restaurant at the time of the attack.

Reynaldo Gonzalez now wears a heart-shaped locket around his neck with his daughter's photo inside.