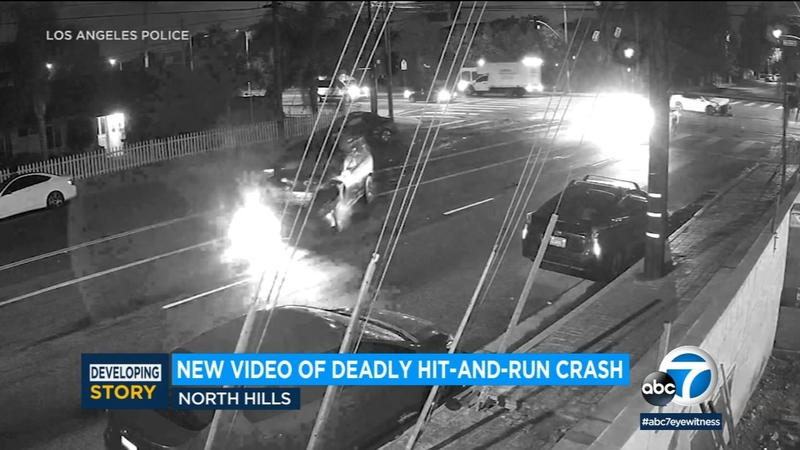 NORTH HILLS, LOS ANGELES (KABC) -- Police are looking for two men who were speeding in a stolen Range Rover involved in a deadly hit-and-run crash in North Hills.

The Range Rover was driving fast north on Hayvenhurst Avenue at about 5:20 a.m. when it slammed into three other vehicles at the Nordhoff Street intersection, police say.

Video shows a stolen Range Rover speed into a North Hills intersection and slam into several vehicles, killing one woman and injuring others.

One woman in a Honda Civic was killed and three other people, in a Toyota Tacoma pickup truck and a Toyota Camry, were hospitalized.

The driver and passenger in the Range Rover fled the scene on foot and police later determined the vehicle had been stolen in Glendale.

"We know there were two suspects in the Range Rover that appeared to be male," said LAPD Capt. Aaron Ponce. "They both fled from the scene. They appeared to go northbound and down an alley and back out onto the street."

Residents of the neighborhood say the area is known for speeding. The roads are straight, smooth and flat.

"The streets can achieve high speeds," Ponce said. "They're flat. They're straight and driver inattention and speed are the number-one cause of our accidents."

Video of the incident, descriptions of the suspects and more details are available at this LAPD YouTube link.