North Hollywood shootout: How the 1997 gun battle changed the course of American policing 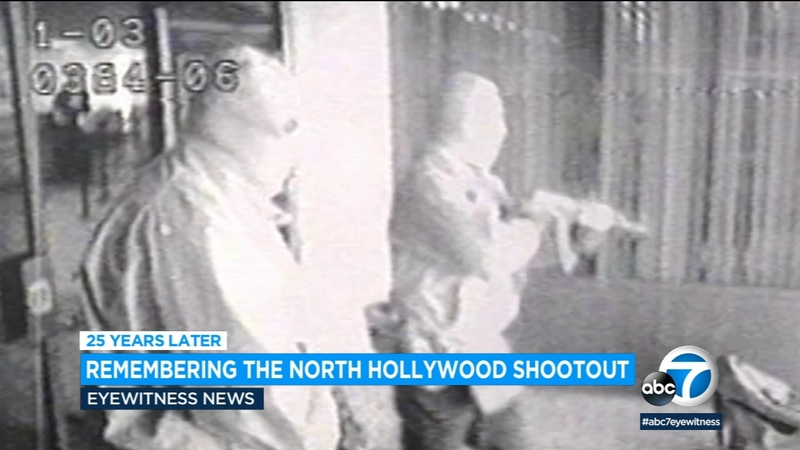 NoHo shootout: How the 1997 gun battle changed the course of policing

It started as a robbery at a Bank of America on Laurel Canyon Boulevard and became one of Los Angeles' most prolific gun battles.

Two heavily armed men - fully clad in body armor - robbed the bank, and then opened fire on civilians and the LAPD.

Tonja Bellard was the dispatcher that morning.

Moore, who was an officer at the time, recalls getting called to the scene and says the shootout significantly changed American policing forever.

"It all comes back and it's kind of in you, just realizing if I had messed up somebody might not have a parent," Bellard said recalling the shootout as she stood next to the bank.

It was a running gun battle through the streets of North Hollywood unlike any other the city had ever seen. It was all broadcasted live on TV.

LAPD Chief Michel Moore was one of the first responders to the scene. He says the shootout had a major impact on police work in the city and across the country.

"It did change the course of law enforcement across this country as we recognize that the proliferation of weapons and firearms and the sophistication of those firearms is only increasing, and is something, unfortunately, we continue to see to this day," Moore said.

About a dozen LAPD officers and several bystanders were injured during the shootout. But the only people who died were the gunmen: Larry Phillips and Emil Matasareanu.

The LAPD had never before encountered men with automatic weapons like this, protected by body armor.

In less than one hour, Phillips and Matasareanu tried to kill 64 police officers and 18 innocent bystanders.

"We now have active shooter training, mass violence training," Moore said. "We teach our officers to respond as a team. To work as a team, to move toward the threat and try to stop that threat as quickly as possible."