"It doesn't feel like 25 years ago," he said. "Watching this footage ... just renews those memories again of that morning."
KABC 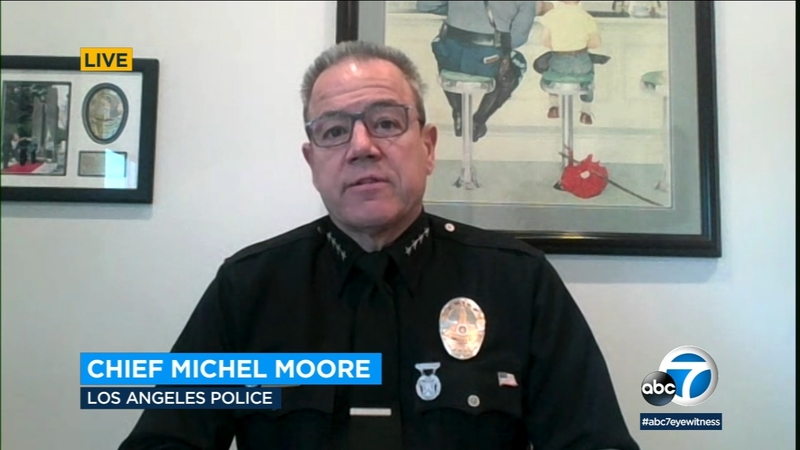 NORTH HOLLYWOOD, LOS ANGELES (KABC) -- It's a moment police officers are trained to prepare for, but still find frightening when it occurs.

On Feb. 28, 1997, two robbers armed with an arsenal of weapons started one of the most prolific gun battles in Los Angeles history known as the North Hollywood shootout.

Chief Michel Moore, who was called to the scene that day, recalls the moment it all unfolded.

"It doesn't feel like 25 years ago," he said. "Watching this footage here ... just renews those memories again of that morning. I arrived in the aftermath of the shooting, and we still thought we had suspects that were in the neighborhood."

It started as one of the most brazen heists in L.A. history. It ended in a war on the streets of North Hollywood. Now 25 years later, we take a look back at the 44 minutes of terror that changed L.A. forever.

Larry Phillips and Emil Matasareanu opened fire on LAPD officers and bystanders after robbing a Bank of America in North Hollywood. The gun battle lasted 44 minutes. The robbers were armed with thousands of rounds of ammunition, custom fitted body armor and weapons altered to be fully automatic assault rifles.

In less than one hour, Phillips and Matasareanu tried to kill 64 police officers and 18 innocent bystanders - all of it happening on live television.

The gun battle lasted 44 minutes. The robbers were armed with thousands of rounds of ammunition, custom fitted body armor and weapons altered to be fully automatic assault rifles.

Moore, who's been a part of LAPD for more than 30 years, spoke with Eyewitness News on Monday about how the shootout has changed how the department responds to active shooter situations. He said it truly changed the course of American policing forever.

The North Hollywood shootout is still considered one of the most violent and infamous bank takeovers. Twenty-five years later, two survivors reflect on what they witnessed.

"What came from this event, compounded by the [Columbine High School shooting in 1999], was active shooter training, which is recognizing, unfortunately, in our society today, that we have individuals that will take possession of firearms and then go and try to conduct mass violence, whether it be at a school place or it be at a shopping center ... as a means of escaping accountability," said Moore.

He said since then, the focus on active shooter training - also known as mass violence training - has grown along with the need for resources to help officers defend themselves and the community.

"We provide [officers] now with patrol rifles that have the ability to overcome suspects who wear body armor or who use high power weapons themselves," explained Moore. "We also equip vehicles with ballistic panels. As you saw that day, those bullets were just riddling those [police cars] ... just going through them and injuring officers and civilians that were trying to cover themselves behind it "

Though despite advances in technology, equipment and communication, Moore said fear is never far from an officer's mind.