Store owners said they face a $600 penalty if they don't leave by the end of the month.
KABC
By Alex Cheney 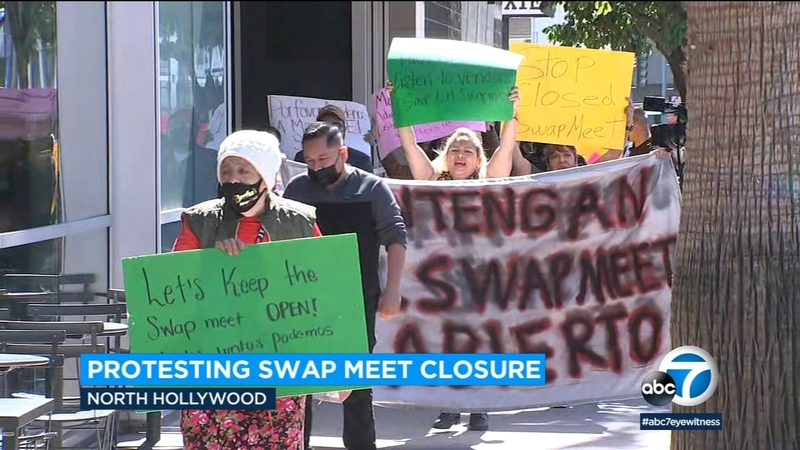 NORTH HOLLYWOOD, LOS ANGELES (KABC) -- For the second day in a row, vendors protested on Lankershim Boulevard over the closure of the North Hollywood swap meet, which is set for the end of March when the lease on the property ends.

"It's sad that all of these people ... this is their only income," said Kathy Palomar, a vendor at the swap meet. "They have nowhere to go anymore, and some of them have more than 30-something years here, and it's not OK for them to kick us out just because they want to."

Store vendors are upset, claiming they only received a 30-day notice to vacate the building. They say they've been told the owners want to tear everything down and put up new buildings.

"We try to keep the place open for longer because they only give it to us 30 days advance," said Catarin Gil, who sells products at the swap meet. "I don't think that's fair. I've been here 22 years, by myself, and also other people been here like the last 32 years."

The swap meet is home to a wide variety of businesses that have long served the Latino and immigrant community in the area. Some of the businesses have been operating for decades.

"Customers have been here since little kids," said Iver Cano, a vendor at the swap meet of more than 25 years. "The swap meet, I believe, has been open for over 30 years, so this swap meet has a lot of history."

ABC7's attempts to contact the owner of the building were unsuccessful on Tuesday.

The swap meet is located in the district represented by Los Angeles Councilmember Paul Krekorian, who released the following statement:

"The Councilmember would prefer to see this business continue at its present location, but regrettably, the operator of the swap meet is not interested in renewing his lease. This is a contractual matter between private parties, a matter over which the City of Los Angeles has no direct authority. If the operator of the swap meet finds another location to do business in the 2nd Council District, this office will be happy to expedite the licensing and permit process."

Store owners said they face a $600 penalty if they don't leave by the end of the month. They said they want an extension of at least three to six months.