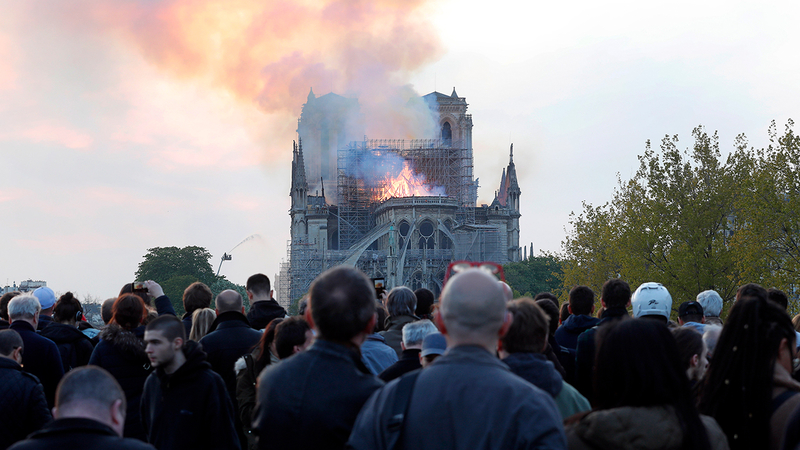 LOS ANGELES (KABC) -- Notre Dame is such an iconic building in Paris with so much significance to so many people, and many at the Archdiocese of Los Angeles on Monday shared their stories of the historic cathedral.

Father German Sanchez, a priest with the Archdiocese of L.A. who works with the city's French community, lived outside Paris for 21 years and would travel to the Notre Dame Cathedral every week to pray.

"It's a shock. I don't have words to say my feelings because it's terrible. It's the history, it's a monument for humanity, it's everything that destroyed in minutes," he said.


Sanchez has been responding to calls all day from devastated parishioners who can't believe the images of Notre Dame on fire. About 12 million people visit the cathedral every year.

"It's a special place, beautiful place, architecture, art with 113 windows," he said. "When you are inside, you know you are in a spiritual place."

This week is Holy Week, where Christians mark the death and resurrection of Jesus.

Construction on the cathedral started in 1163.

RELATED: Notre Dame Cathedral: Before and during the fire

Katya Mosally, who lives in L.A., shot video inside the cathedral while visiting Paris last week.

"This is devastating," she said. "The French people in France or abroad are devastated by this news. It's a national symbol for France."

Dr. Meredith Cohen, an associate professor of art history at UCLA, has made countless visits, many times with her students, to study the world's most famous Gothic cathedral that dates back to the Middle Ages.

"It's the beautiful rose windows on the facades, that's what's associated with Paris," she said. "The building is an artwork built by hand in a time when there was no heavy machinery to do this. It's really an extraordinary feat of mankind to be able to build them."

The loss of the cathedral as we know it is also hitting members of the Santa Monica High School choir. They sang inside Notre Dame within the past 2 weeks.

"I remember walking around and I looked and all the beautiful stained glass windows, the paintings -- all breathtaking," said student Janet Leyva.

The choir at La Canada High School also recently made the trip...

"Just knowing that these things exist is one thing but going and seeing them and appreciating them while you're there is very important," said student Elana Sverdlik.

A massive fire engulfed the upper reaches of Paris' soaring Notre Dame Cathedral as it was undergoing renovations Monday, threatening one of the greatest architectural treasures of the Western world as tourists and Parisians looked on aghast from the streets below.

The blaze collapsed the cathedral's spire and spread to one of its landmark rectangular towers, but Paris fire chief Jean-Claude Gallet said the church's structure had been saved after firefighters managed to stop the fire spreading to the northern belfry. The 12th-century cathedral is home to incalculable works of art and is one of the world's most famous tourist attractions, immortalized by Victor Hugo's 1831 novel "The Hunchback of Notre Dame."