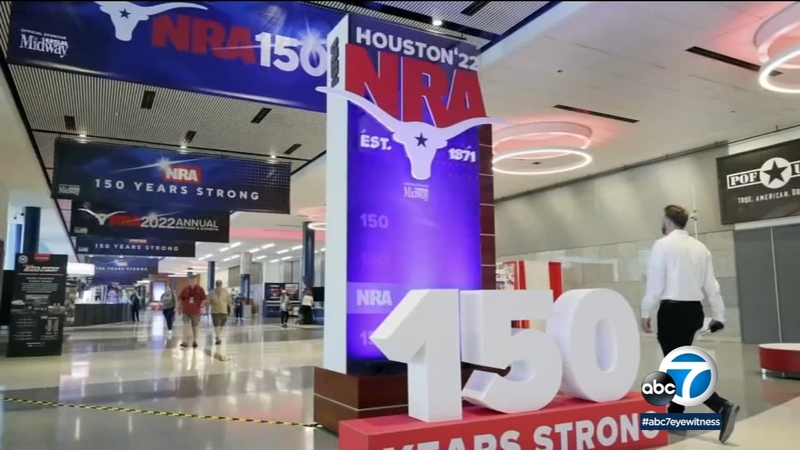 HOUSTON (KABC) -- There is growing demand for lawmakers to do something to stop mass shootings.

This comes as as the National Rifle Association held its convention in Houston.

Outside the convention center, thousands of protestors rallied against gun violence.

Among the speakers was Texas candidate for governor, Beto O'Rourke.

"Let us commit ourselves right now to doing the hardest things that we can think of, because nothing about this will be easy," he said.

Sylvester Turner, the mayor of Houston, said organizers should've considered postponing the event. He held an event where he stressed there needs to be changes to laws.

"This is a situation and a problem that's not going to go away, just wishing it goes away," said Turner. "It's only going to go away if we step up and we take definitive action."

Also among the speakers was David Hogg, who survived the shooting at Marjory Stoneman Douglas High School in Parkland, Florida, that left 17 people dead.

"Even if it's one law that saves one life, whether it be here in Texas or in Washington D.C., we must focus on where we can find common ground," he said.

A number of people have dropped out of the convention, including musician Don McLean and Texas Gov. Greg Abbott, who pulled out at the last minute. He appeared via a video message.

Another one of the speakers was Lt. Gov Mark Robinson from North Carolina.

"Time for messing around is over folks, and the time for blaming law abiding citizens should have never begun," said Robinson. "It is time to put the blame where it goes, which is at the shooters feet."

But all eyes were on Former President Donald Trump, who gave Tuesday's headlining speech.

"Even more repulsive is their rush to shift blame away from the villains who commit acts of mass violence and to place that blame onto the shoulders of millions of peaceful law abiding citizens who belong to organizations, such as our wonderful NRA," said Trump.