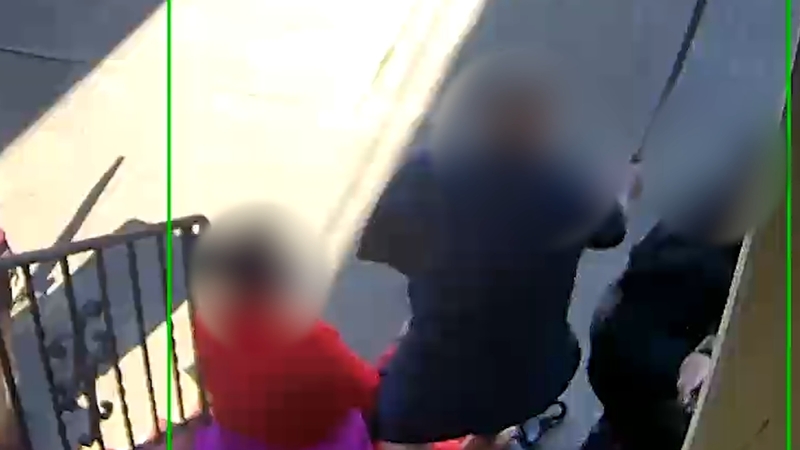 OAKLAND, Calif. -- Dramatic surveillance video from Oakland shows the moment four people approach a pair of Asian seniors, rob them and are chased away thanks to the couple's machete-wielding son.

The couple's son told Dion Lim, anchor for ABC7's sister station ABC7 News in San Francisco, that the group of men approached his parents on their front porch after they had come home from grocery shopping Monday, March 29 at around 4:30 p.m. He did not want to be identified or share publicly the neighborhood where this incident happened.

The video shows the robbers grabbing the gold chain off his mother's neck and also reaching into his father's pockets to take a cell phone and keys.

The son says he's glad he was home at the time.

"I heard my mom screaming and that's when I ran out. If I hadn't come out, they would have done a lot worse," he said.

He said he was changing his clothes when he heard the commotion, which is why he ran out the door barefoot. However, he thought quickly enough to grab a nearby machete to thwart the men from advancing into the house.

This robbery and assault comes just one day before a Vietnamese couple was tied up in front of their 7-year-old daughter less than 10 minutes away. That family was robbed of much of their life savings and their home was ransacked.

Both sets of victims say they want specific action taken by Oakland Police and showed displeasure in their response times and amount of care taken in both incidents. The man in the porch attack from the 29th says he'd like to see the culprits be "locked away for 10 years minimum."

ABC7 News has reached out to Oakland Police multiple times seeking specifics in each case and are awaiting a response.