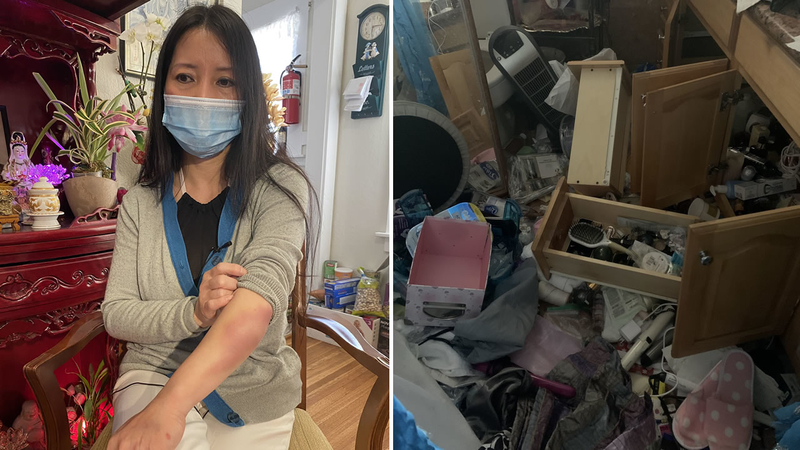 OAKLAND, Calif. (KABC) -- An Asian couple from Oakland had much of their life savings stolen and their home ransacked after they were tied up by robbers in front of their 7-year-old daughter. What one robber said to the family at the end of their terrifying ordeal shows the economic struggle for some during COVID-19.

Dressed in khaki and pink, wearing a Hello Kitty necklace, 7-year old Amy recalls the terrifying Tuesday night she heard a loud "bang" coming from the back of her parent's home.

"I'm scared they're going to come back though and I don't want them to come back," she says. The 7-year-old can no longer sleep after that night when four men broke in through the back door window just after the family came home from temple.

"They said if you do anything the first person I shoot will be your daughter."

Roseni, who doesn't want to use her last name out of fears of retaliation, says the robbers tied her and her husband up and then attacked.

"They punch him in the mouth and his teeth bleeding...his neck," said Roseni.

They also forced Amy under a blanket as they went from room to room leaving practically no item untouched.

Everything from Amy's brother's sneaker collection to the bangles off Roseni's wrist was pilfered. Roseni pushes up one sleeve to show the dark purple bruise where each of her seven bracelets was pried off.

The most heartbreaking of all for these Vietnamese immigrants: much of their life savings was stolen.

This crime happens at a time when Asian Americans in the Bay Area and around the country are feeling targeted. Roseni says at least three families along her street have been robbed or attacked in recent months.

Just this past week, ABC7 News anchor Dion Lim was alerted to multiple robberies in Oakland and San Francisco, including one involving a 72-year old Chinese man who was robbed of $17,000 in camera equipment while taking photos near the Embarcadero.

The only thing that kept Roseni from breaking down during her ordeal was what one assailant whispered in her ear.

"Don't worry we won't kill or rape you we just came here for the money. You know that COVID-19 right? We have no jobs, we have no money, that's what's making us do this."

When asked if it sounded like an apology of sorts, Roseni nodded her head.

"Yeah, that's why I feel better. At least he has a human heart."

As this family deals with the monumental task of putting their home and lives back together, a message to law enforcement: pay attention to Asian American victims. Here is their message to the robbers.

CeFaan Kim has more on a suspect who was arraigned and charged after attacking an Asian woman as she was walking to church in Midtown on Monday.

"Please don't come back here again. You already got what you want, leave us alone for our life," says Roseni as she shakes her head.

Little Amy has something to ask of the men who came into her house too.

"I want them to be nice and not rob people. They can get their own money by making a job," the 7-year-old said.