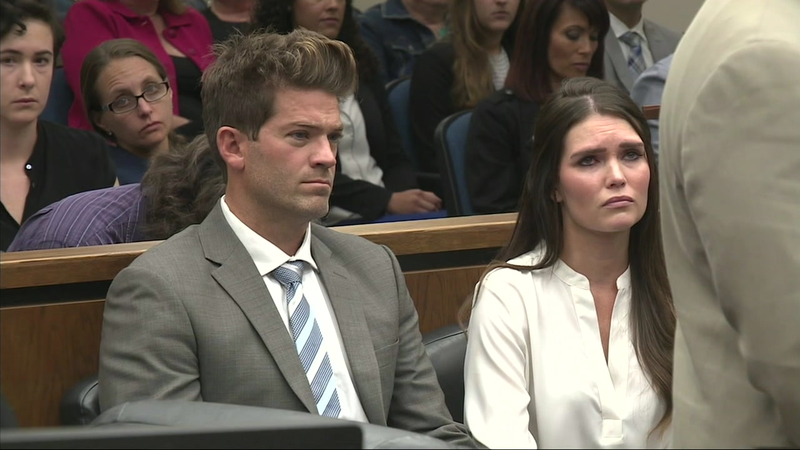 NEWPORT BEACH, Calif. (KABC) -- A Newport Beach surgeon and his girlfriend who are accused of sexual assault and rape pleaded not guilty in court Wednesday.

The couple face a total of 18 charges, with seven added during Wednesday's hearing, which included kidnapping.

In addition to the charges, five new victims were added to the case, bringing it to a total of seven.

Prosecutors asked for a bail amount of $3 million, but the judge set it at $1 million for both. The couple, who later posted bail, had to surrender their passports.

Dr. Grant Robicheaux and Cerissa Riley were charged in September with sexual assault against two women and one count of rape. But authorities also found more than 1,000 videos of victims whom the couple are suspected of recording in many cities. Investigators believe there may be widespread victims.

Following their arrest, authorities received more than 100 calls regarding the case. Investigators also said there are more than 12 "credible potential victims" who came forward.

The two women who came forward say the assaults happened in April and October 2016. The first victim said she met the couple at a restaurant in Newport Beach and was invited to a party. Once intoxicated, the 32-year-old woman was allegedly taken to Robicheaux's apartment, where he is suspected of drugging and raping her.

She contacted police the next day and tested positive for multiple drugs, according to the Orange County district attorney.

The second victim said she drank with the couple at a bar in the city until she was no longer conscious. The two are suspected of then taking her to Robicheaux's apartment and sexually assaulting her with the intent to commit rape. The victim woke up and screamed for help until a neighbor called police, who responded to investigate the case.
The pair were suspected of possessing large quantities of illegal drugs, which were recovered at Robicheaux's home in January 2018. In addition to those allegations, he is suspected of possessing two illegal, unregistered assault rifles, four other firearms and several large capacity magazines, according to the OCDA's office.

There were also allegations that Robicheaux assaulted a woman 20 years ago when he was only 18.

During Wednesday's court hearing, prosecutors allege the crimes date as far back as 2009. They suspect the couple worked as a team until July 2017 to lure victims.

Lawyers for the couple said their clients deny all of the allegations.

"It is Grant and Cerissa's absolute position that no non-consensual sex ever took place," attorney Philip Cohen said.

The 38-year-old doctor was once named "Bachelor of the Year" by Orange Coast magazine and appeared on a Bravo reality show about online dating.