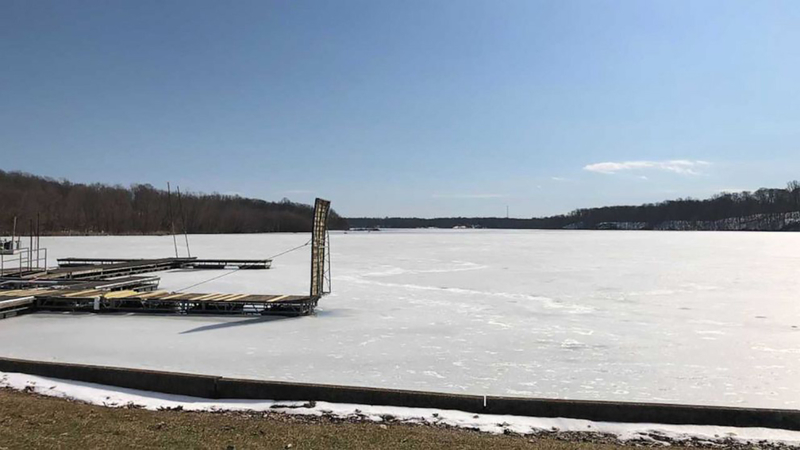 HILLSBORO, Ohio -- A teenage girl has died after saving her brother when they both fell into a frozen lake in Ohio, officials said.

An officer who responded to the drowning incident also died, authorities said.

The 16-year-old girl and 13-year-old boy fell through the ice near boat docks at Rocky Fork State Park in Hillsboro on Tuesday evening, according to the Ohio Department of Natural Resources. The 911 call came in around 6:30 p.m.

By the time the Paint Creek Joint EMS and Fire District arrived, the girl was under the ice, according to Lt. Branden Jackman. The water was 36 degrees, he said.

The boy was taken to the hospital and was stable, but his sister was recovered by divers unresponsive, authorities said. She has not been identified publicly by authorities.

"She got him out, before she succumbed," Jackman told Cincinnati ABC affiliate WCPO.

While at the scene, Ohio Department of Natural Resources Officer Jason Lagore suffered a medical emergency and was transported to a local hospital, where he was pronounced dead, the department said. It did not provide details on the medical emergency.

Video shows an 11-year-old boy's rescue from an icy Texas pond after a teenager spotted him while walking her dog.

A 15-year veteran of the department, Lagore founded its first K-9 academy and led its Division of Parks and Watercraft K-9 training program.

"Our hearts are with the family and loved ones of Officer Jason Lagore, who died in the line of duty last night," Ohio Department of Natural Resources Director Mary Mertz said in a statement Wednesday. "Our law enforcement officers and their families carry a unique and challenging burden of responsibilities, and we are deeply grateful for their service."

Lagore is survived by his wife, two young sons and K-9 partner, Sarge, the department said.

On Wednesday, Ohio Gov. Mike DeWine ordered flags lowered on public buildings and grounds in Highland County and several other locations "in honor of his life and service."

Jackman had a message for Ohioans the day after the deadly incident.