"It's not easy living here," said one resident, who's currently living in two trailers on the property.
KABC
By Rob McMillan 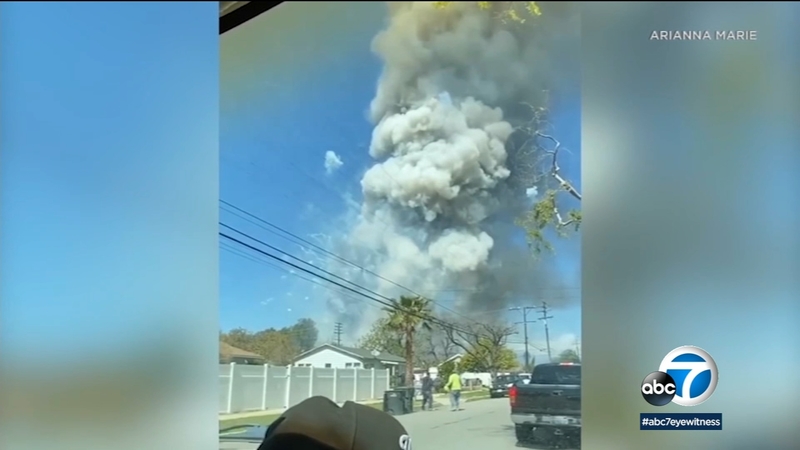 Nearly year after deadly Ontario explosion, some are still struggling

ONTARIO, Calif. (KABC) -- More than a year after an illegal cache of fireworks exploded in the backyard of an Ontario home, many residents are still rebuilding their properties.

The family that lives directly west of the home where the fireworks exploded has yet to even begin to rebuild.

"Still seeing the house here, it can be hard to look at sometimes," said Angela Fierro outside the family home, which is still red-tagged and unsafe to occupy after catching fire following the explosion. "You just feel tired, you feel so drained."

"I had just gone back into my room because I was making breakfast," said Fierro. "Suddenly there was the first pop, and the next thing I know, the second one goes off."

Fierro said family members immediately fled the property in many different directions. For a while, she didn't know whether anyone was hurt.

"I just couldn't believe what was happening," she said. "I didn't see my sister. I didn't know where my mom was. I was absolutely frightened."

Two people at the property where the explosion happened were killed.

The mother of 38-year-old Alex Paez said her son and 20-year-old cousin, Cesar Paez, were the victims.

The explosion shattered windows at several nearby properties and ignited multiple structure fires.

But while some families have either finished rebuilding or are at least partially through the process, Fierro said they've seen no progress at all.

"It's frustrating because we haven't been able to get a lawyer because none of us were injured," she said.

Fierro said initially, her parents hired an insurance adjuster in the days after the fire destroyed their home.

So far, they've received more than $157,000 from their insurance company.

But she said no contractor has agreed to begin work because of doubts that the insurance payments will be enough to cover the restoration process.

Records indicate their 790-square-foot home was built in 1930.

Fierro said one of the reasons contractors say it will be so expensive is that if they were to rebuild, the home would need to be brought up to current building codes.

Fierro said the insurance adjuster has sent them a bill for $13,000. But she said her family has declined to pay, since work hasn't even begun.

Now she says they haven't spoken with their adjuster in several months.

"They were pretty attentive at the beginning, but then all of a sudden, it's almost as if they almost gave up because there wasn't enough money collected to rebuild the house," Fierro said.

In the meantime, she and four other people are living in two trailers on the property.

"It's not easy living here. There are many things that we and others take for granted when not living in your home, like having your own space," Fierro said.

On the other side of the home where the explosion occurred, the owner is still in the process of rebuilding two rental houses.

He said one of them is nearly complete, but claims the contractor hired to work on the second one walked off the job because of doubts as to whether the insurance company would pay enough to complete the rebuild.

But for another family that lives to the north of the property where the explosion occurred, life is beginning to return to normal.

Sarai Guzman said they just moved back into their rental home about a month ago.

Even though she said her landlord raised her rent by nearly $1,000 citing repair costs, she's just happy to be back inside her home. For nearly a year, Guzman said she and seven other family members lived inside a trailer on their property.

"It was a hassle, having to shower with cold water," said Guzman. "We were all cramped and had many fights and disagreements. [My daughter] wanted her own space, a place where she could play. So, it was hard."

As for the Fierro family, not only is there exhaustion, but also frustration.

Not knowing when, if ever, they will begin rebuilding.

"When people said it was going to be a while, I said OK. I thought to myself it would be a year. But now it's been a year, and absolutely nothing," said Fierro.