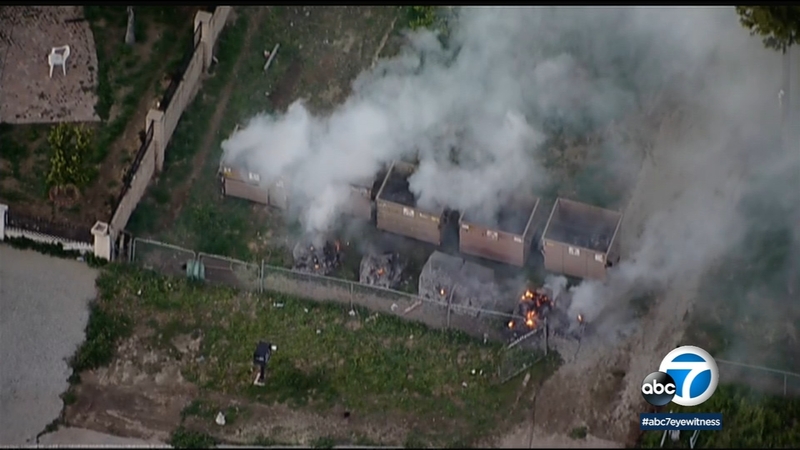 ONTARIO, Calif. (KABC) -- Two men have been identified after being killed when a cache of fireworks caused a massive explosion at a home in Ontario on Tuesday afternoon, shattering nearby windows on surrounding properties and igniting multiple structure fires.

At a morning press conference, a spokesman for the Ontario Police Department had identified the two missing men by name, but noted that whether they were the two people who were killed in the incident had not been confirmed by authorities.

A GoFundMe page was later created in honor of the two men.

"Alex, a son, brother, father, friend, leaves behind his wife and three beautiful kids the ages of 12, 3, and the newest addition to the family, a newborn baby girl," a statement on the fundraising site said. "Cesar, 20 years of age, a whole life ahead of him leaves behind his parents and sister with this deep pain and sense of emptiness."

Relatives say Cesar was visiting his cousin at the home.

Meanwhile, crews at the scene continued working to clear some 80 nearby properties of debris from the blast -- a combination of exploded and possibly un-ignited ordnance and fireworks that are creating a dangerous situation.

They collected 60 containers, each with a 27-gallon capacity, of unexploded fireworks that they were planning to dispose of. They started burning the unexploded material on site Wednesday night and planned to continue in the morning.

Officials noted besides fireworks, there was also at least one firearm discovered among the debris that landed at nearby homes.

Two people died when a massive cache of commercial-grade fireworks ignited at an Ontario home, setting off multiple fires and explosions that shook the neighborhood.

Authorities - including the FBI and ATF - are investigating Tuesday afternoon's explosion of what were believed to be a cache of commercial-grade fireworks.

The incident occurred shortly after 12:30 p.m. Tuesday in the 400 block of West Francis Street. About 50 firefighters still worked to douse the flames for hours after the initial blast, as they could not approach close to the property because of the risk of additional explosions. Fire crews remained at the scene Wednesday morning.

Videos posted to social media showed flames and a thick plume of smoke rising from the home, and then a long series of fireworks shooting up into the air, sending nearby pedestrians running for cover.

Neighbors described hearing a series of explosions that felt like small earthquakes. Hours after the first explosion, several smaller blasts went off, apparently from remaining fireworks.

Steve Bailey, who lives nearby, said his whole house shook from the initial explosion.

"It felt like something hit the roof, or a car crashed into the house," Bailey told ABC7.

The two people who were killed appeared to be inside or around the home, Ontario Fire Chief Ray Gayk said.

Fireworks are illegal in Ontario, as they are in many California cities. Police said they were investigating the incident as a possible felony.

Ontario Police Chief Mike Lorenz said officers have been called to the area in the past on reports of fireworks being set off.

Officials didn't immediately have information about where the cache in the explosion came from, or what was happening in the home where the blasts erupted.

"Don't know exactly what was in there, however, there was a large amount of some sort of explosives -- could be a combination of a lot of different things. We just don't know yet, because it's too dangerous for us to get in there. We have to go through a very meticulous process," Gayk said. "The problem with a lot of these types of fireworks is they get wet, and they start to dry out and they get very volatile at that point."

Cleanup efforts are expected to last days, followed by an investigation into what caused the initial explosion.

Just after 2 p.m. Tuesday, fire officials issued an evacuation order for Francis Street and Maple Avenue Between Fern and San Antonio avenues. A temporary care and reception center was established at the De Anza Community Center, located at 1405 South Fern Avenue in Ontario.

Eastbound and westbound traffic on Francis, Maple and Locust streets was shut down between Euclid and San Antonio avenues.

Arlene Fierro who lives next to the house, told ABC7 there have been issues with the home before.
EMBED More News Videos

"This happens year-round. I always hear explosions coming from the house, illegal fireworks," Fierro said. "Explosion bombs, just loud sounds. It was constant all the time. I did call authorities plenty of times. There wasn't much they could do, I guess they had to catch them in the act."

This time, as soon as she heard something, she started recording. Her footage shows her asking about the safety of other people in her own home and then a series of explosions rips out the glass, creating a terrifying scene.

"I immediately just thought of my parents, they were in the front house," she said. "My small animals are in the area, I called for them. I wasn't able to do much but get myself out to safety."

Outside the home, she saw a car in flames.

As Fierro spoke to ABC7, she showed her jeans, which were burned and ripped open just above the knee with burn scars on her thigh. She says she grabbed some water to put out the flames.

"My leg caught fire," Fierro said. "I remember every detail, me falling and flames a little bit... It was one of the scariest things I've experienced. Just felt like I was in a warzone... Part of my house fell on me, part of the door and part of the wall, it just collapsed from the explosion."

Footage from the scene showed at least one home burning and a shed and scattered debris on fire in a large backyard.

Neighbors across the street had their home's windows shattered. Their grandchildren were playing in the back yard at the time and narrowly avoided serious injury.

Suzie Owens says she was physically thrown more than once by the force of the multiple explosions.
EMBED More News Videos

"We all started screaming. I came outside, then I hear gunshots, it sounded like," Owens said. "Then it was fireworks. It was another boom, an explosion. It literally threw me off the grass."

She went inside the house and another explosion threw her against the wall.

"No one got hurt," she said. "I'm glad the little one decided to move quickly or that glass would've fallen on her. She was in the bedroom."

Several blocks from the scene, footage recorded by a witness showed smoke rising above the fire while the distinctive sound of fireworks exploding was clearly audible. Meanwhile, multiple car alarms could also be heard.

Video from AIR7 HD showed firefighters rescuing a horse that was trapped in an enclosure, with spot fires burning dangerously close by.

Update: A previous version of this story described Alex Paez as the uncle of Cesar Paez. Family members say they were cousins.

Want to stream this coverage right on your TV? Search "ABC7 Los Angeles" on your streaming device and download our free app - learn more here.