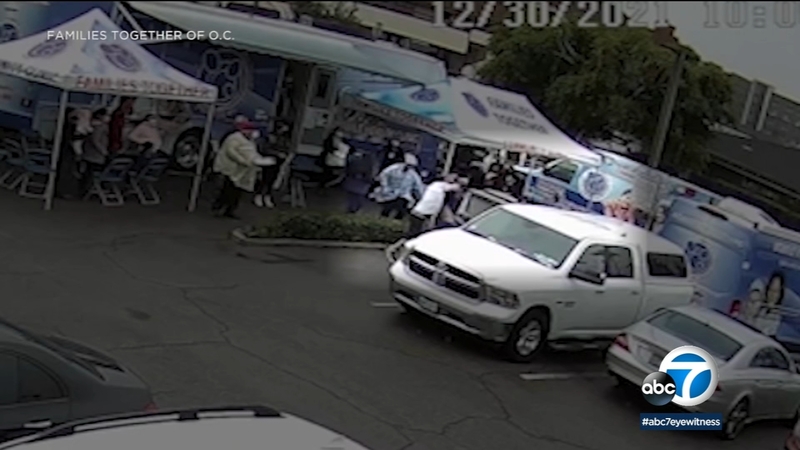 Attack on workers at OC vaccine clinic captured on video

TUSTIN, Calif. (KABC) -- Staff at Families Together of Orange County said Friday they hoped the judicial system ensures employees and other health care workers are protected by the law following a violent attack at their clinic at the end of December.

Families Together of O.C. CEO Alexander Rossel said harassment at the facility over the last two years coming from people not agreeing with COVID-19 testing and vaccinations is nothing new.

"People yelling across the street, some other ones filming, some other ones chasing our vans," Rossel said, adding that it never got to the point of people being physically aggressive with employees. But that all changed the morning of Dec. 30 with a violent attack at the Tustin location caught on security cameras.

Staff said the man seen on video wearing a white T-shirt arrived outside their mobile vaccine clinic in the parking lot.

According to Tustin police, the suspect is 43-year-old Thomas Apollo of Poway.

A violent attack on staff members that occurred last month at a COVID-19 vaccination clinic in Tustin resulted in a man's arrest, police said.

Health care workers said Apollo called them "murderers," accusing them of forming part of a COVID-19 hoax, of killing people with vaccines. They said Apollo grew angrier after a security guard asked him to wear a mask.

In the recording, as a worker approaches the suspect, Apollo throws his first blow, hitting an employee.

Others, including patients, step in to help as one worker pinned under Apollo takes several punches.

That employee, who didn't want to go on camera, was still recovering Friday and is back to work after receiving emergency medical care.

"He said, 'This is my mission. This is my job,"' Rossel said of the employee.

According to clinic staff, it took several shocks with stun guns to subdue and arrest Apollo, who was booked on battery and resisting arrest.

The suspect was cited and released the following day.

With his staff on edge and increased security at his clinic, Rossel said they will continue doing their job and hopes those in the judicial system do theirs.

"I just hope and pray that the full extent of the law is pressed onto this individual because this cannot be an example for other people to just get away to come and attack the health care workers," Rossel said.

As of Friday, the Orange County District Attorney's Office had yet to file charges against the suspect.

Apollo is scheduled to appear in Orange County Superior Court on Jan. 27.

A spokesperson with the OCDA's Office told Eyewitness News Friday they're still reviewing the case.