1 dead, multiple others critically injured after shooting inside church in Laguna Woods

Churchgoers stopped and hogtied the shooter, described as an Asian male in his 60s, preventing further carnage, officials say.
KABC 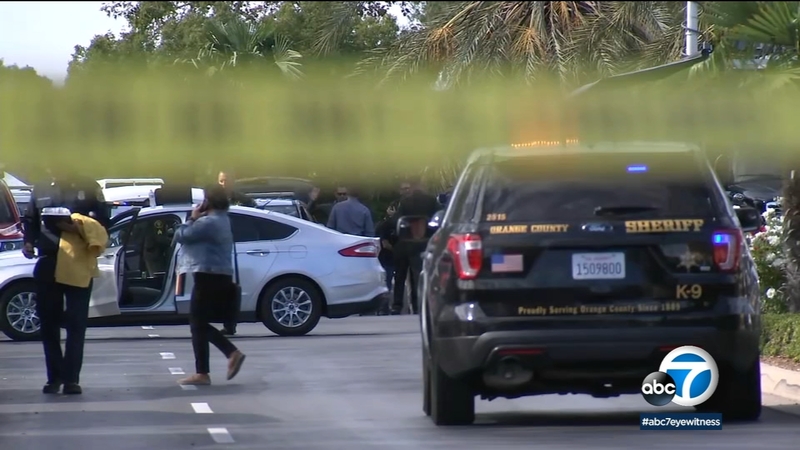 1 dead, multiple others injured after shooting at Laguna Woods church

ORANGE COUNTY, Calif. (KABC) -- At least one person was killed and multiple others were injured during a shooting on Sunday at a church in Laguna Woods, authorities said.

According to the Orange County Sheriff's Department, it happened inside Geneva Presbyterian Church located in the 24000 block of El Toro Road just before 1:30 p.m.

An update posted to Twitter by the sheriff's department says four people were critically injured and one other suffered minor injuries.

Another person was found dead at the scene, the tweet read.

Two others were taken to Orange County Global Medical Center in Santa Ana.

None of the victims have been identified. However, officials say five of the victims, four men and one woman, all Asian, are all between the ages of 66 and 92.

#OCSDPIO Deputies are responding to reports of a shooting at a church on the 24000 block of El Toro Road in Laguna Woods. Multiple victims have been shot. More details to follow, PIO en route.

At a Sunday afternoon press conference, officials said the suspect, described as an Asian adult in his 60s, was stopped and hogtied by the legs with an extension cord by a group of churchgoers after the suspect opened fire at a lunch banquet following church service.

At least two weapons were taken from the suspect by the parishioners, officials said. Following the incident, O.C. sheriff's bomb K-9 teams swept the church grounds to ensure there were no secondary devices.

The suspect, who has not been named, was not injured during the incident. Officials say they don't believe the suspect lives in the area, and investigators are working to determine whether he has a connection to Geneva Presbyterian Church, or to the congregation.

"At this time, we do not know what the suspect's motive may be or whether he had an intended target, or whether this is even a hate-related incident," O.C. Undersheriff Jeff Hallock said at Sunday's press conference. "Members from the trauma intervention program also are on scene to provide crisis counseling to the congregants."

The FBI has joined this ongoing investigation.

"First of all, my sincerest condolences to the families and the victims here today, and also a really think a heartfelt thank you to the congregants who are very brave today in their actions," said Kristi Johnson, assistant director in charge - FBI Los Angeles. "We have linguists who are going to arrive soon to assist. We have our Evidence Response Team who is on standby, and we also have our behavioral analysis unit present on scene."

"Obviously, motive is always the question, which determines the extent of involvement at the federal level, or whether federal or local prosecution is pursued," Johnson said. "And at this time we are working very hard to determine the motive."

ATF is also assisting with the investigation.

"Our agents have initiated an emergency trace on the recovered firearms," said Stephen Galloway, assistant special agent in charge, ATF Los Angeles. "Those traces are currently in progress and will be thoroughly investigated once they're complete."

The luncheon was in honor of a former pastor of the Taiwanese congregation.

In a video obtained by Eyewitness News, firefighters, first responders and deputies were seen surrounding the church as the investigation began.

The scene remains active and El Toro Road has been shut down between Calle Sonora and Canyon Wren Lane.

Drivers are urged to avoid the area.