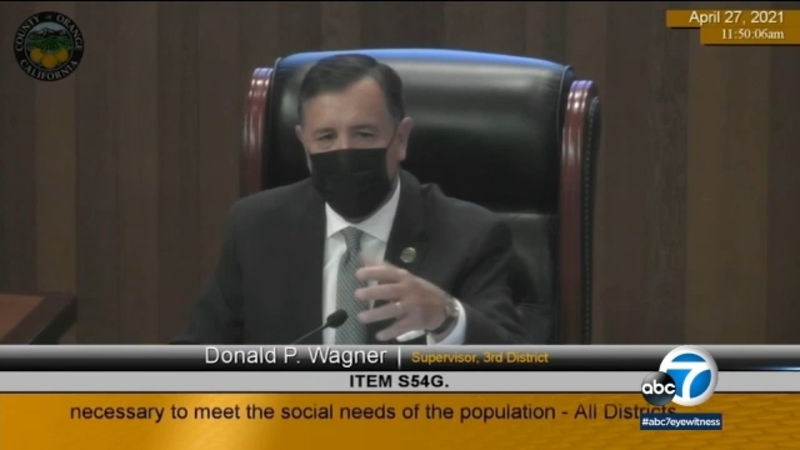 Orange County officials are battling back against anti-vaccine rhetoric and misinformation amid criticisms of a new app that some claim would invade their privacy.

The debate got heated at this week's Board of Supervisors meeting as a number of residents blasted the county for considering the app, claiming it will track them and violate their privacy. They called on the county to cancel the contract for the app, which they likened to a vaccine "passport."

"How can you guys sit there and even think that you can force the people of Orange County to inject themselves with something that hasn't even been approved under emergency use only?" one woman asked at the board meeting.

"You are the problem, look at what you're pushing out into our county," another woman said.

County officials are fighting back against what they see as myths and misinformation spreading among some residents.

One supervisor sought to debunk that claim but his line of questioning is capturing attention, and some misunderstanding, on social media.

"In the vaccine, we heard about an injection of a tracking device. Is that being done anywhere? In Orange County?" Wagner asked.

Chau tried not to laugh as he answered.

"I'm sorry I just have to compose myself," he said. "There's not a vaccine with a tracking device embedded in it that I know of existing in the world. Period."

Funny. I’m working through the conspiracy theories we heard about at the meeting, debunking them with Dr. Chau, and these folks try to spin it as serious concerns. What dishonest hacks.

On Twitter, a video clip of Wagner was posted with the implication he was taking the conspiracy theories seriously. He replied:

"Funny. I'm working through the conspiracy theories we heard about at the meeting, debunking them with Dr. Chau, and these folks try to spin it as serious concerns. What dishonest hacks."

On Thursday, Wagner further clarified his remarks and sought again to debunk the rumors and misinformation about the vaccine.

"We hear rumors. Some of them crazier than others," he said.

"I raised those, not because they're true. but to allow Dr. Chau to assure the public that the vaccines are safe."