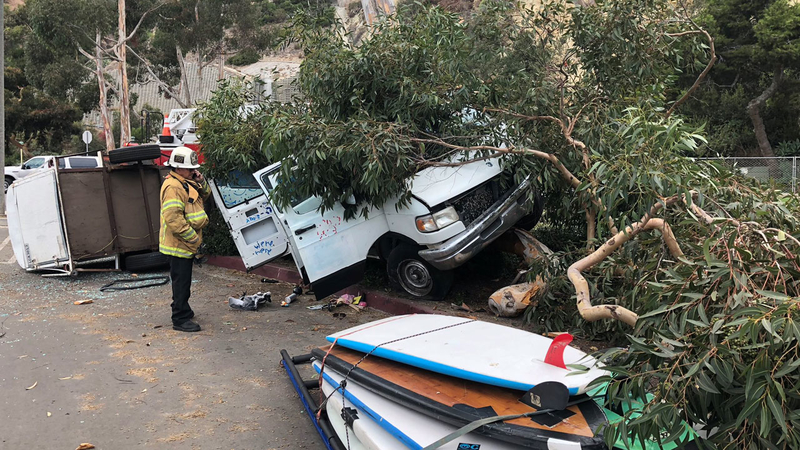 "All I heard was kids screaming bloody murder. It was terrifying. It was a horrible sight," Hanea Sanchez said.

Four patients also between 9 and 12 years old were treated for minor injuries at the scene and picked up by their parents.

"I think the potential here could have been way worse, so all were incredibly lucky," Capt. Tony Bommarito said.

Footage from AIR7 HD captured the white van caught in the tree as a small trailer the vehicle towed was on its side behind the van.

Surfboards and kayaks the van towed were scattered near the front of the van.

Authorities said the children were part of an afterschool program.

Details regarding what led to the crash were not immediately available, but witnesses said the driver mentioned her brakes had gone out. They also said she was honking her horn as she careened down the hill.

Those witnesses also ran to help the children out of the van.

"Everybody was trying to do as much as possible to keep the kids calm. A lot of women were just sitting there and holding kids they'd never even met in their life and just praying for them, and hugging them, and loving on them," Sanchez said.

Authorities said the driver refused to be transported to a hospital. But during the chaos, she was visibly shaken.

Investigators said the children will recover from their injuries and should be released from the hospital Thursday.