The system is now being expanded to help the area become more drought resilient.
KABC
By David Gonzalez 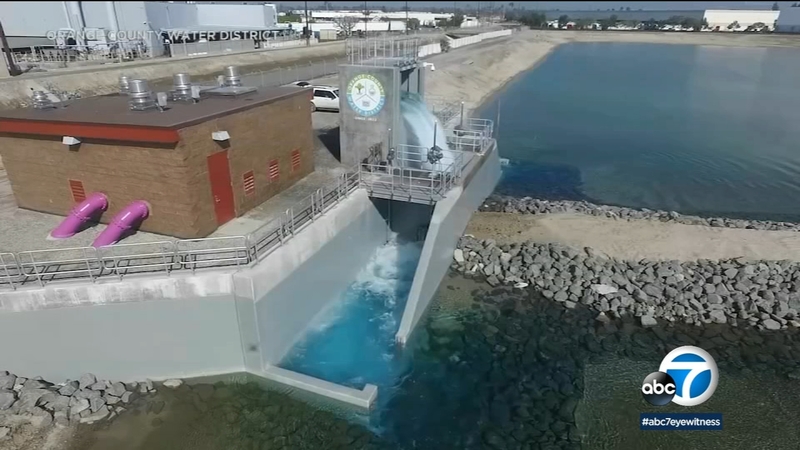 FOUNTAIN VALLEY, Calif. (KABC) -- The largest water recycling plant in the world can be found in Fountain Valley, California, and work is underway to make it even bigger.

According to the Orange County Water District, its Groundwater Replenishment System takes about 110 million gallons of wastewater from the county's sanitation district every day that would normally be dumped in the Pacific Ocean.

It then puts it through a three-step treatment process to produce purified water.

"The water that comes to this facility has already been through a significant amount of what we call conventional wastewater treatment," said Orange County Water District Executive Director Mehul Patel.

Patel said that water is then used to replenish a local groundwater aquifer, which is the main source of drinking water for 2.5 million people in the county.

The first phase is called microfiltration and it uses manmade filters to take out bacteria and larger particles.

"The second step is reverse osmosis," Patel said. "That's kind of the heart of the process."

Patel said during this phase, salts, organics, viruses and other contaminants are removed.

The final step uses high amounts of ultraviolet light with hydrogen peroxide to further break down anything that might pass through the first two phases.

"So after this step we just add a little of the minerals back in and then it goes right into the groundwater aquifer to replenish," Patel said.

Also, Steve Sheldon, the OCWD president, said the system is now being expanded to help the area be more drought resilient.

"Because we live in an arid region, we need to prepare for droughts that come and go all the time," Sheldon said. "This one will pass again, but we need to be able to provide water to our customers."

When finished, Sheldon said the plant will be able to produce up to 130 million gallons of water a day.

He said it is replenished groundwater that is tapped into by 19 communities and pumped out to residents.

The expansion of the water district's groundwater replenishment system is expected to be completed by January 2023.