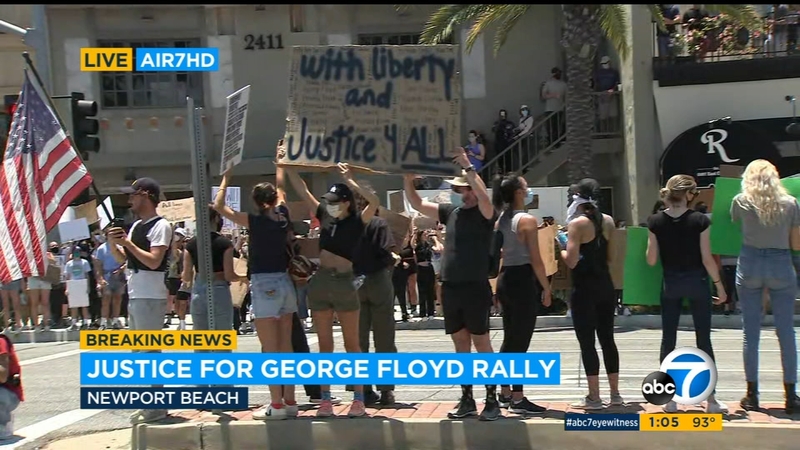 Hundreds protest in Newport Beach over death of George Floyd

ANAHEIM, Calif. (KABC) -- Thousands of demonstrators gathered at locations across Orange County on Wednesday and all of Southern California to protest George Floyd's in-custody death as Minnesota officials announced all four officers involved have now been charged.

In Newport Beach, hundreds lined the street on MacArthur Boulevard near Pacific Coast Highway, waving signs and chanted as cars drove by.

It was one of four events planned in Newport Beach alone.

Some in the crowd said they were glad to hear of new charges filed against the officers involved in the incident that preceded Floyd's death.

"I think that's great," said one demonstrator. "We need to stand up together, as the American people and we need to fight the systemic racism we have going on."

The event appeared to be peaceful.

The Newport Beach Police Department said it is aware of social media posts regarding demonstrations throughout the county.

"The NBPD is committed to protecting life and property from those who would attempt to transition this moment away from being peaceful in nature or to destroy the property of another," the police department said in a statement.

In Anaheim, demonstrators converged on the Center Street Promenade in downtown, the site of Monday's protest.

"We intend to use crowd-management strategies and tactics to mitigate the possibility of lawful crowds escalating into an unlawful assembly," Newport Beach police Chief Jon Lewis said. "Appropriate enforcement action will be taken swiftly when necessary to maintain order.''

Lewis said at least six other protests are planned in the county, including in Irvine.

Several cities spanning the county have been the sites of protests, including Santa Ana, Huntington Beach, Costa Mesa and Brea following the in-custody death of George Floyd by Minnesota police.

During Tuesday's protest in Brea, the march took a powerful turn when demonstrators stooped down to their knees in calm solidarity in front of police officers for a silent protest.

A Sunday protest in Huntington Beach was declared an unlawful assembly, but demonstrations in the region have been largely peaceful.