Orange County Health officials have reportedly recommended that the state allow Disneyland and Knott's Berry Farm to reopen once the county moves into the less restrictive orange tier.
KABC 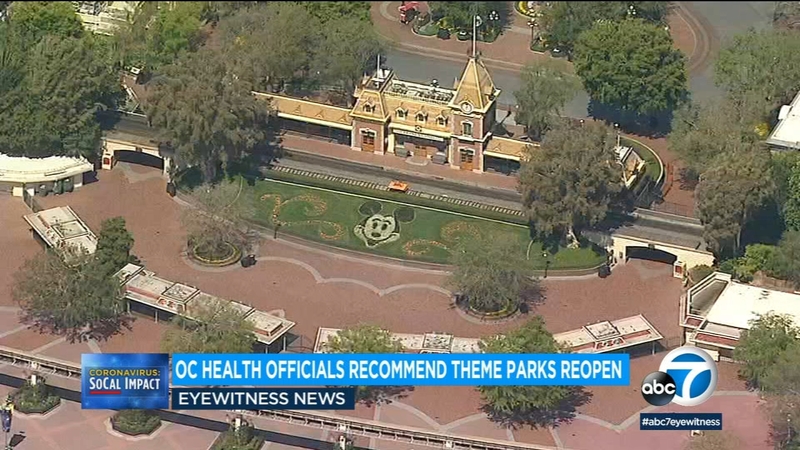 Orange County Health officials have reportedly recommended that the state allow Disneyland and Knott's Berry Farm to reopen once the county moves into the less restrictive orange tier.

Health officials have worked closely with Disney to prepare for the park's reopening, according to the Orange County Register.

Supervisor Doug Chaffee encouraged Dr. Clayton Chau, the director of the county Health Care Agency and the county's chief health officer, to "keep pushing'' on the reopening of theme parks in the region.

Theme parks have been closed since mid-March as they await reopening guidelines from Gov. Gavin Newsom.

Orange County Supervisor Lisa Bartlett, the president of the California State Association of Counties, said she serves on a "kitchen cabinet'' committee of the organization that is lobbying the state to let theme parks move into the orange tier category instead of being lumped in with mass gatherings like live concerts and sporting events in the yellow tier. Chau said he is the only county health officer who has made that recommendation to the state.

Bartlett said the yellow tier would reflect when a county has "eradicated Covid,'' so it would be unfair to restrict theme parks to that status before reopening.

"Disneylands have opened across the world and have not seen any spikes in Covid,'' Bartlett said.' And they have significant health and safety protocols... We are collectively pushing, pushing, pushing to have that done sooner rather than later.''

Orange County could move into the orange tier within the next few weeks.

Anaheim officials are expecting guidelines from the state soon that will provide a path for reopening theme parks like Disneyland and Knott's Berry Farm.

The cumulative case count since the pandemic began stands at 54,898.

RELATED: 'We will not open until Disney does': Worries among Anaheim business owners heightened by Disney layoffs
EMBED More News Videos

The positivity rate, which is reported each Tuesday, inched up from 3.1% last week to 3.2%, but the daily case rate per 100,000 people rose from 4.4 to 5.2, which is higher than the cutoff of 3.9 to qualify for a move from the red to the orange tier in the state's coronavirus monitoring system.

The county has 35% of its intensive care unit beds and 70% of its ventilators available.