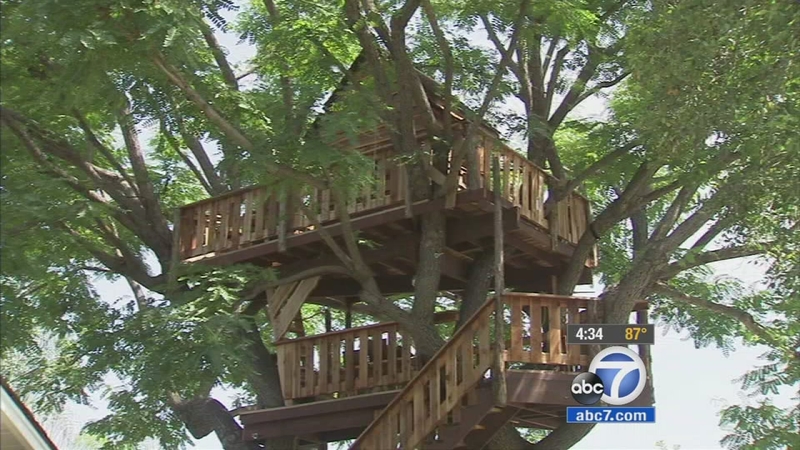 "I like the fact that it's so huge and it's right here in the neighborhood," said the 11-year-old as he climbed to the third level of his favorite hangout, located in a 67-year-old Yellow Jacaranda tree.

Chen's mother Joni Doherty says they built the treehouse more than a year ago as a tribute to her late husband Jack Chen, who was 39 when he died in a surfing accident in 2013. It was a way for her sons, Andrew and Nicholas, 13, to remember their dad.

"It is definitely an eye-catcher," Nicholas Chen said.

The treehouse not only catches the attention of passersby, but is also a gathering spot for neighbors, especially when decorated with lights at Christmas or decked out with spooky decorations for Halloween.

"I like to go up there and watch the sunrise and the sunset," Doherty said.

But the fate of the treehouse is now in question. Doherty received a notice of violation from Orange County Code Enforcement last May. Someone complained.

She says before spending $16,000 to have the treehouse built professionally, she called the county for guidelines.

"They told us they didn't issue permits for treehouses," Doherty said.

"Generally, treehouses and playhouses that are less than 120 square feet and contain no utilities don't need a permit. However, this treehouse clearly exceeds that, as well as encroaches into the front property line setback and exceeds the height limit for accessory structures," said Orange County spokesperson Jean Pasco in a statement.

Pasco said the county has not yet asked for the treehouse to be removed; however, it has asked Doherty to obtain the proper permits to make sure the treehouse is safe and structurally sound.

Doherty says she's now applying for the permits and reaching out to neighbors for their support to save the treehouse. They've started an online petition at ipetitions.com/petition/save-the-treehouse.

Doherty says she hopes the petition will help when they enter the public hearing phase of the process.

So far, the county says it does not have a deadline for that, since it continues to work with Doherty.

"It's sad one person can take the joy away from so many," said long-time Rossmoor resident Ronald Singer.

"I just hope that everything works out and they can keep that for the family," said Sonia Reza of Los Alamitos as she looked up at the treehouse.

Orange County Supervisor Michelle Steel has reached out to Doherty to reassure her that the county will not remove the treehouse.

"Your neighbors informed me about the notice of violation on the tree house on your property, I have copied them on this email. I can assure you that my staff and I are working as we speak with Orange County Public Works on this issue, and that your tree house will not be removed by the county," she wrote in an e-mail.

Related topics:
orange countyrossmoorchildrenfamilybuilding code violation
Copyright © 2021 KABC-TV. All Rights Reserved.
TOP STORIES
Search resumes for Brian Laundrie in Gabby Petito case
Heat advisories issued for most of SoCal on first day of fall
Movie and film workers might be headed toward a strike
California struggles to conserve water amid historic drought
Growing scam targets Bank of America and Zelle customers
Woman safe after video of possible abduction in Bell Gardens
FDA expected to authorize limited wider use of Pfizer booster
Show More
Who is running for mayor of LA? Here are the top contenders
Anti-Black bias events most prevalent in 2020: CA attorney general
Suspects in Kristin Smart disappearance to face trial
Willie Garson, known for 'Sex and the City,' dies at 57
Officials: Many Haitian migrants are being released in US
More TOP STORIES News