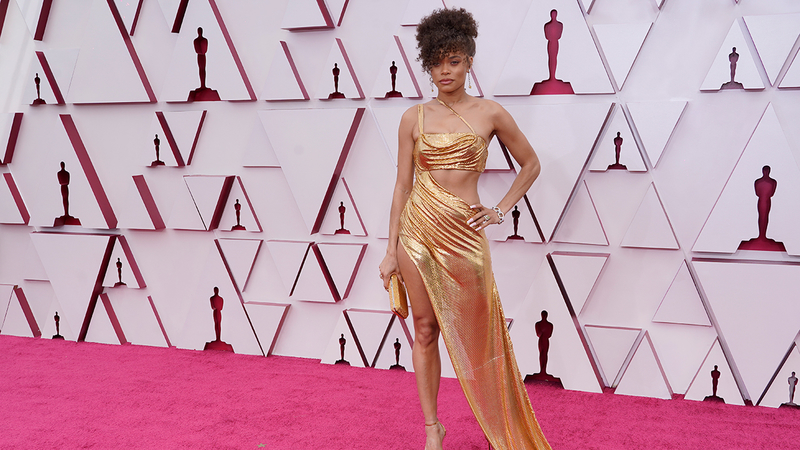 LOS ANGELES -- Oscar best actress nominee Andra Day said she "is an altered person" after her experience working on "The United States vs. Billie Holiday," adding that she is "changed by playing [Holiday]."

"I had read a scripture today about being a light-bearer about exposing dark places or uncovering stories. I think that's what we did with 'Billie,'" she said.

Back in 1972, Diana Ross helped tell the story of Billie Holiday in "Lady Sings The Blues."

'She is responsible for the movement as we know it today.' Singer/actress Andra Day completely transformed herself to fill the role of music and civil rights legend in 'The United States vs. Billie Holiday.'

With very little acting experience, Day decided to take on the role of music legend and civil rights activist Billie Holiday. Prior to this movie, Holiday would often be referred to as a controversial singer who had a drug problem that killed her. It's true she had a drug problem that came, in part, to numb her childhood. Holiday was raped at 10 and sex trafficked at 14.

The controversial part, as far as the government was concerned, involved a song about lynching.

"It was also Billie Holiday singing 'Strange Fruit,' singing about racial terror in America in defiance of the government," said Day.

'I felt nothing but embraced and loved by this community, ' Oscar nominee Andra Day received the film world's top honor for her first movie.

One line of the song is, "Black bodies swinging in the southern breeze." They remain powerful words.

"I say the godmother of civil rights because, if you can imagine, her singing this song and the entire American government coming down on her, hunting her for singing this song. And there's no movement to support her. She's shouldering this all on her own," Day said, adding, "We owe her a huge, huge debt of gratitude. She is responsible for the movement as we know it today."

Even though she is new to the movie world, Day feels she's been welcomed with open arms.

"I felt nothing but embraced and loved by this community, which is amazing," said Day. "They appreciate the work, the performance and her story."

How did director Lee Daniels know the Grammy-nominated singer -- but novice actress -- could do it?

"Her spirit," he said, "Her knowing that she had to honor Billie and even questioning whether or not she could do Billie."

She also had faith. So did Daniels. "Her acting coach sent me this tape of her metamorphosing into Billie from Andra," he said, "And there was no question about it that she was -- she was Billie Holiday."

"The United States Vs. Billie Holiday" is now streaming on Hulu.