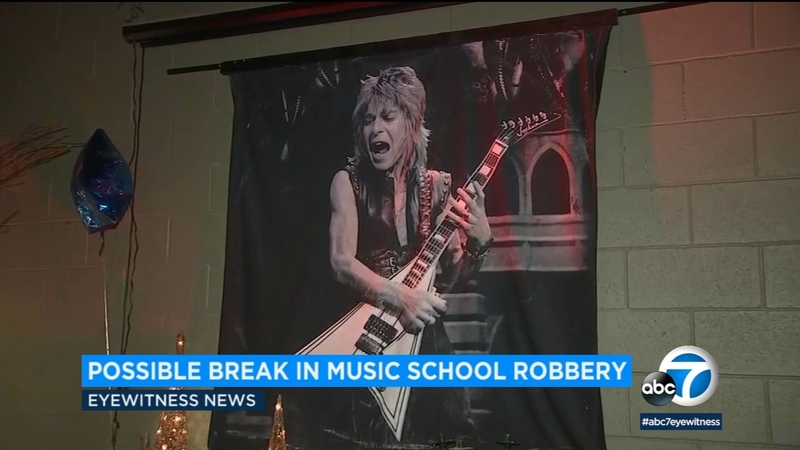 NORTH HOLLYWOOD, LOS ANGELES (KABC) -- A number of items that were stolen from the family of Ozzy Osbourne's late guitarist Randy Rhoads were recovered early Sunday when an Eyewitness News viewer spotted them in a dumpster.

Someone had broken into the Rhoads family music school in North Hollywood on Thanksgiving night and stole irreplaceable instruments, memorabilia and photos.

After the burglary, Osborne said he was heartbroken about the theft and offered $25,000 for information leading to an arrest.

As many of you have heard, the Musonia School of Music in N. Hollywood, CA (the school where #RandyRhoads famously taught guitar) was viciously robbed on Thanksgiving night. I’ve decided to personally offer a $25,000 reward
Full statement: https://t.co/E5uSj9M8R4 pic.twitter.com/uW6U8TCRJo

Local resident Bobbi Fredriksz says she spotted a guitar and photos in a dumpster as she was walking her dog early Sunday morning.

At first she didn't think anything of it until she got home and saw a report about the theft on ABC7.

"As I was laying in bed, not feeling well, when it came on I was like wait a minute, oh my God," Fredriksz said. "I ran all the way back over here it was still here. Somebody else started to see it and called police."

She says while waiting for the police, she pulled some of the items out of the dumpster to protect them from the rain.

Rhoads was a rock guitar icon who played on Osbourne hits such as "Crazy Train." He also played with Quiet Riot. Rhoads was killed in a plane crash in 1982 while on tour with Osbourne.

Ozzy Osbourne is offering a big reward after a devastating loss for the family of the late guitarist Randy Rhoads.

The Rhoads family owns Musonia, a music school and museum in North Hollywood. Randy once taught there and since his death it has attracted fans from around the world.

The burglar made off with the first electric guitar Randy ever played and two horns that belonged to his late mother, a musician who opened Musonia in 1948.

The family said the museum sustained a lot of damage and remains closed indefinitely, but the school is still open.

Rhoads' nephew said the family is grateful to the Osbournes for helping spread the word about the theft.