Out and about: Mountain lion P-22 spotted roaming around in Silver Lake

Officials confirmed it was P-22 through his tracker, but they don't know why he's roaming so far from his home in Griffith Park.
KABC
By Leanne Suter 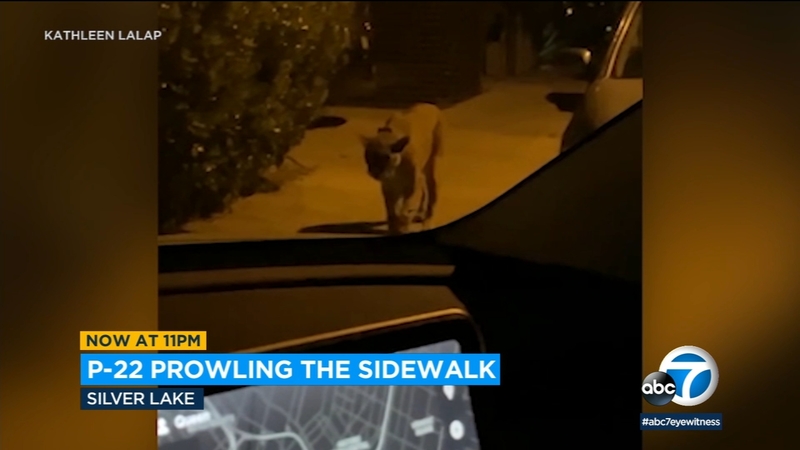 SILVER LAKE, LOS ANGELES (KABC) -- Hollywood's most famous mountain lion, known as P-22, is now widening his roaming range after he was spotted in Silver Lake.

Kathleen Lalap came across the big cat as he strolled down Berkeley Circle early Tuesday morning. She captured the surprising scene on her cellphone from the safety of her car.

Lalap initially thought it was coyote, but her friend recognized it as a mountain lion.

"The mountain lion, P-22, just walked down the sidewalk like it's a person, just chill, like really slow," said Marc Bondoc.

Officials confirmed that it was P-22 through his GPS tracker, but they don't know why he's roaming so far from his home in Griffith Park.

"He may be hunting smaller animals. He prefers mule deer and we know that's his primary diet, but there's also a bunch of possums out there and racoons, and we know Silver Lake has a ton of coyotes," said Ana Cholo with the Santa Monica Mountains Recreational Area.

L.A.'s most famous cougar is known to roam the neighborhoods in the Hollywood Hills but he doesn't normally travel far outside the safety of the park. News of the sighting is now putting Silver Lake residents on edge.

Aaron Chu now takes a baseball bat with him to walk his dog, Charlie.

"I just want to make sure I'm not out with my dog and he's vulnerable with a mountain lion," he said. "The neighbors, though, were concerned that they didn't want the mountain lion to get hit by a car and they were hoping they could get him back to Griffith Park."

P-22, who is now 12 years old, crossed the 101 and 405 freeways to make it to Griffith Park. He survived mange caused by rat poison and officials are hoping his nightly walkabouts won't come to a tragic end.

Lalap says seeing him in person was something she'll never forget.