Harald Herrmann heads up one of the largest food banks in Southern California, and now he's auctioning off his personal collection of Picasso prints to help feed the hungry.
KABC
By Tony Cabrera 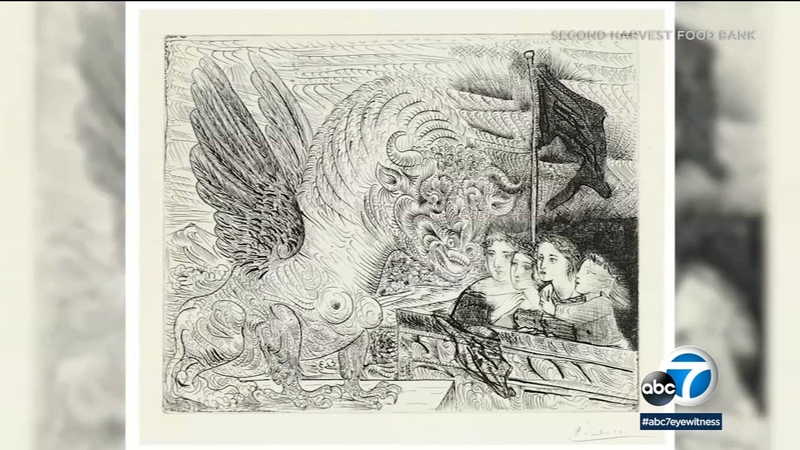 ORANGE COUNTY (KABC) -- Harald Herrmann heads up one of the largest food banks in Southern California, and now he's stepping up even more to help in this time of extreme need.

Herrmann, CEO of Second Harvest Food Bank, is auctioning off his personal collection of Pablo Picasso prints to help feed the hungry.

Herrmann has gone public with his very own private collection of Picasso prints in hopes of shining light on hunger in Orange County and across the nation - specifically with the lead piece, "The Frugal Meal."

"That piece basically came to life during Picasso's blue period, the beginning of his blue period. We're kind of in a blue period now," he said.

Herrmann built the rare collection over time, targeting Picasso's early years between 1900 and 1940. He remained the anonymous owner as it traveled on display to museums and other places. He says he's always planned to sell the prints as part of his retirement strategy with a commitment to donate a portion of the proceeds to the food bank. He decided now made sense because of what he's seen during the pandemic - a huge need.

What started as an April Fool's Day prank has turned into a lucrative business for two teen brothers from Monrovia: Spray-painting the logos of SoCal sports teams onto front lawns.

"Right now and especially for these next 18 to 24 months, we need to meet that call, and unfortunately, it's greater than ever," said Herrmann.

"Unprecedented is a word I know that many use just given where we are, but that is truly unprecedented. That has never happened. It is a first for us in 38 years. We've never seen demand like we see today as a food bank," he said.

To facilitate the sale, Herrmann is going through Christie's Auction House in New York. He'll then donate 10% of gross proceeds to the food bank, which could add up to about $100,000. Christie's has also pledged to donate part of their commission to Feeding America - something he hopes will encourage others to also give.

"Lots of folks have lost their jobs. Unemployment is front and center for us, and I'm humbled that I'm able to contribute to that and not just with sweat equity, but with some money," said Herrmann.