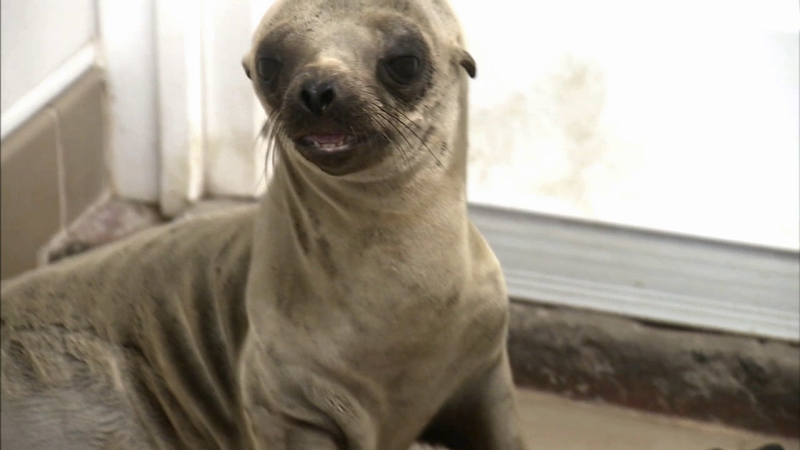 LAGUNA BEACH, Calif. (KABC) -- Staff at the Pacific Marine Mammal Center in Laguna Beach released a sea lion, named Holly, back into the ocean after taking care of her for more than a month.

Holly was found in December on a beach in Corona Del Mar. She was dehydrated, emaciated and had parasitic infestations.

But now she is 81 pounds heavier and was able to go back home. Now the focus is on 25 other sick sea lions at the center. The staff said this time last year there were only four sick sea lions needing care.

While it's too early to know the exact cause for the uptick in sick sea lions, some marine biologists believe El Nino or other ocean influences are making it harder for the mammals to find food.

"[The ocean changes could be harming] their food source, possibly moving their foraging grounds in a different location that what they normally would be," said Kirsten Sedlick, the animal care supervisor at the center.

Staff said it costs about $2,500 to nurse one sea lion back to health. To help the nonprofit center pay those bills, the owner of two restaurants in Laguna Beach made a $10,000 donation.

John Nye owns the Driftwood Kitchen and The Deck in Laguna Beach. He said the donations come from his annual "Sip and Shuck" fundraiser. He went out with the staff to set Holly free, and watching the healthy sea lion swim away made him want to help out even more.

"It was emotional today with the release. You can't help but get choked up in seeing this animal go through such joy and getting back to its life," Nye said.

Nye will continue his restaurants' partnership with the center in the future.