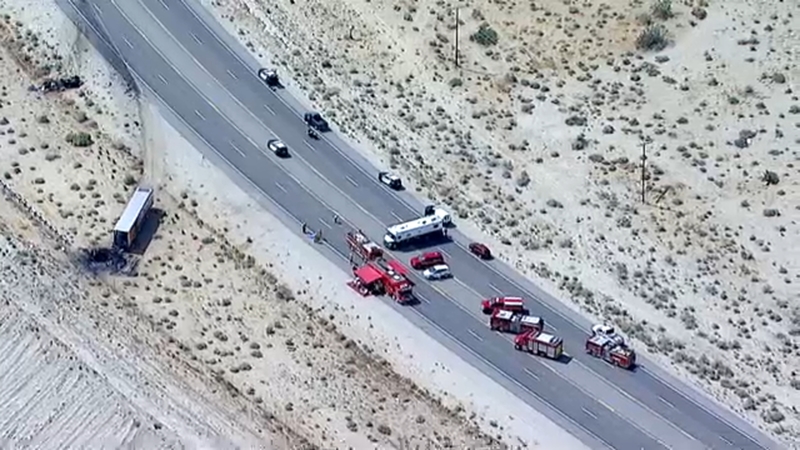 PALMDALE, Calif. (KABC) -- Three people were killed in a violent, fiery crash involving a big rig in Palmdale on Tuesday.

Aerial video from AIR7HD showed wreckage scattered along the roadway.

Two of the three men who were in the Nissan were pronounced dead at the scene. The third man was transported to an area hospital, where he was pronounced dead.

The man driving the big rig, who was the sole occupant of the vehicle, was transported to a local hospital for minor injuries. He is expected to survive, authorities said.

Sheriff's investigators said it appears the Nissan truck veered into oncoming traffic, resulting in the crash. They added that alcohol and drugs do not appear to be a factor.

Pearblossom Highway was shut down from Four Points to 75th Street East.

The investigation into the crash is ongoing. If you have any relevant information about this incident, you're urged to contact Detective Sherman at 661-272-2400.
Report a correction or typo
Related topics:
palmdalelos angeles countycar crashtraffic fatalitiestraffic accidentroad closure
Copyright © 2021 KABC-TV. All Rights Reserved.
More Videos
From CNN Newsource affiliates
TOP STORIES