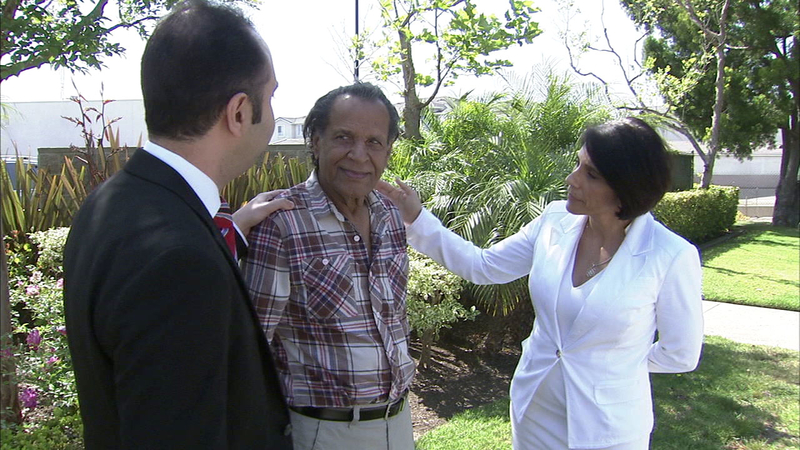 LOS ANGELES (KABC) -- A local financial planner did more than most when he found a homeless man sleeping on the lawn of his Los Angeles office building.

Rad is talking about 77-year-old Parvis Sistani, whom he calls Peter. Peter was homeless for three years and spent his nights on the lawn outside Rad's office.

"He was just very desperate and just needed somebody to hold his hand," Rad shared.

Rad took Peter into his home, and with the help of a co-worker, bought him clothes and food, and looked to find Peter a more permanent bed.

What ensued was a month full of frustration, wasted phone calls and dead-ends.

"I called so many places and nobody said, 'Hey, we can help,'" said friend Blanca Reynoso, who is also helping with Peter's situation.

Peter is Iranian by birth, now American by citizenship, but he didn't have an ID. He needed his social security number to get an ID but couldn't get his number without - wait for it -- an ID. It took two weeks to solve that problem.

"We said, 'Hey, we finally got him an ID,' and they said, 'Where has he been sleeping?' We said, 'He's sleeping on my couch.' And they said, 'Oh, sorry, he's not homeless anymore.' Can you believe that?" Rad recalled.

Eyewitness News brought Peter's plight to L.A. City Attorney Mike Feuer, whose office has tried to expedite the process of getting Peter help.

"In our city, right now, we need to do better. All of us need to do more," Feuer said.

It looks like for Peter, help will come soon. Until then, he'll spend his days on the office couch and his nights in a bed, thanks to the kindness of strangers.

"Too much, too much strong for me. But I look at these two? My God, you helped me," Peter said.

"Now, it shouldn't be the case that a TV station has to intervene to assure that basic services are provided to people in need," Feuer said. "But you (ABC7) were there, and you did. And I hope that that is just another example of the kind of teamwork that it's going to take to resolve our homeless crisis."
Report a correction or typo
Related topics:
societylos angeleslos angeles countyhomelessvolunteerismfeel good
Copyright © 2021 KABC-TV. All Rights Reserved.
TOP STORIES
Police find items belonging to Brian Laundrie, apparent human remains
Garcetti to LA city workers: Get vaccinated by Dec. 18 or lose job
Shooting victim drives several blocks, dies after crash in South LA
Walkout at Netflix over Dave Chappelle special brings out dozens
How to watch the Orionid meteor shower tonight
FDA OKs mixing COVID vaccines; backs Moderna, J&J boosters
Port of Oakland offers to help ease SoCal backlog
Show More
14-year-old boy killed in Apple Valley hit-and-run; suspect sought
LA City Council votes to suspend Mark Ridley-Thomas from office
New technology battles climate change by using sand to absorb carbon
Roscoe's Chicken N' Waffles dedicates day to give back
Facebook planning to change its name, report says
More TOP STORIES News