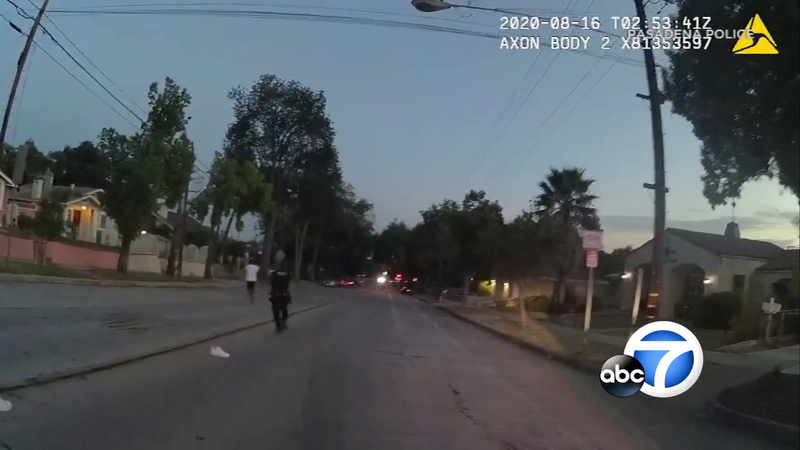 The shooting happened Saturday around 8 p.m. when officers made a traffic stop for a vehicle code violation near Raymond Avenue and Grandview Street.

Pasadena police say the driver cooperated with the officers and admitted to driving on a suspended license. But the passenger took off running from the scene.

An investigation was underway after an officer-involved shooting left one man dead in Pasadena.

An officer gave chase and police say the passenger removed a gun from his waistband. That's when the officer opened fire, striking the man.

A Pasadena police statement and more information is available here.

The full video released by the department at that link is slowed down at times to show what officials say is the man reaching for his waistband and holding a gun in his left hand.

They say the officers could see the gun in his hand as he ran and at one point, he turned to look at the officer over his right shoulder. The department says that's when the officer fired twice, thinking the suspect was about to turn and shoot.

After the shots were fired, the man kept running for some time before collapsing onto the sidewalk on Raymond Avenue.

The suspect in the video has been identified as 32-year-old Anthony McClain of Pasadena.

Police say McClain was previously convicted of felony robbery and was under supervision of county probation. Under the terms of his probation he was not allowed to possess a firearm.

After McClain collapsed on the sidewalk, paramedics were called. The bodycam video shows him on the ground with a bloody wound in his torso. He later died in the hospital.

Police said they recovered a handgun at the scene and it is depicted in the video.