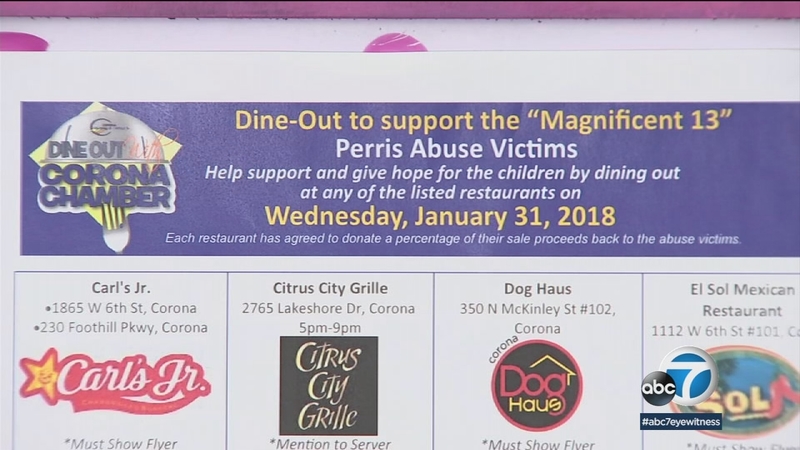 PERRIS, Calif. (KABC) -- More than three dozen restaurants are raising money Wednesday in support of the 13 siblings allegedly held captive in a Perris home by their parents.

The Corona Chamber of Commerce is hosting a "dine-out day" in the victims' honor.

Those who live in the Inland Empire say they're still shaken by the actions of David and Louise Turpin, the parents accused of torturing and chaining up their 13 children.

Area restaurants teamed up Wednesday to raise funds for the Turpin kids.

"They are going to be impacted by this for the rest of their life," said Squeaker Bootsma, who contributed to the fundraising effort. "Every day of their life there's going to be a part of this that they still have to overcome."

Fifteen to 20 percent of the bill of those who ate at 40 Inland Empire restaurants went to the Turpin children, contingent on permission from the customer.

More than $400,000 has been raised for the Turpin children so far, thanks to donations collected by the Corona Chamber of Commerce and the Riverside University Health System.

But with 13 children in need, the Corona Chamber of Commerce says it's not enough. "We're talking about 13 lives. $400,000 is not going to be much in the long scheme of things, so that's why we did this dine out event," said Bobby Spiegel, the chamber's president.