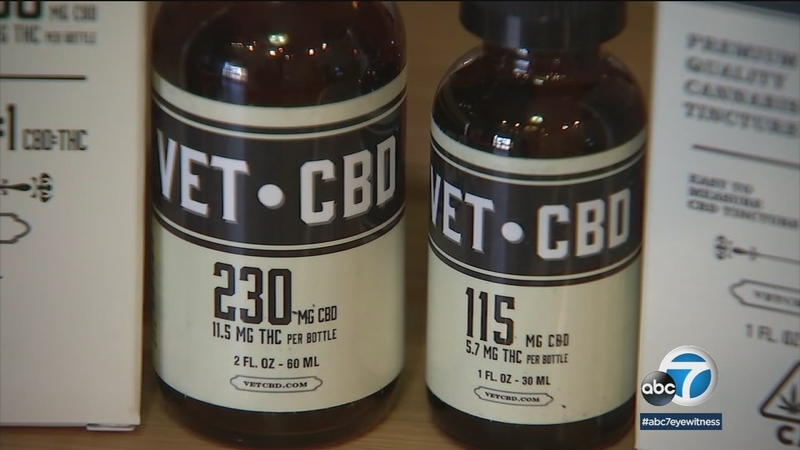 LOS ANGELES (KABC) -- Research shows people aren't the only ones who can find pain relief from cannabis - turns out weed is also helping some of our four-legged friends.

Meet Chorizo. They call him "Cho" for short. He's an older pit bull mix and unofficial mascot at the Milo Foundation, an animal rescue organization.

"We don't know exactly how old he is, but the homeless fellow who ended up giving him to us said he was 14 - and that was 4 years ago," Milo Foundation Executive Director Lynne Tingle said.

Cho has arthritis and a bad knee, making it tough for him to get around, but he's getting something many humans in his condition turn to for relief - cannabis.

The legalization of medicinal weed in California paved the way for manufacturing of products made just for pets.

"Now he's feeling like a spring chicken a lot of the time," Tingle said.

But Cho's not smoking a joint. He's eating treats that contain CBD, the non-psychoactive component of cannabis that has been shown to relieve pain and reduce inflammation.

"So there's no high to it. It's purely medicinal," said Dr. Tim Shu, a Cerritos-based veterinarian and founder of VETCBD that makes tinctures for pets.

"The traditional medications - while they can be very effective - it doesn't work for all pets, and so a lot of the time we need to look at other sources of potential medical benefit," Shu said.

Two months ago, researchers at Cornell University released the results of a study treating dogs with osteoarthritis and multi-joint pain. They found more than 80 percent of dogs treated with cannabis extract showed dramatic improvement over those who received a placebo.

A similar study is currently underway testing cannabis on cats.

Veterinarian Gary Richter said too many people are giving their pets pot from dispensaries and not all cannabis is the same. Pot that contains too much THC, the stuff that makes people high, can be dangerous.

"I have had people carry their dogs in because they were so stoned they could not walk," Richter said.

By law, Richter and other veterinarians can't tell pet owners how to use cannabis because in 1996 voters only gave medical doctors the right to prescribe medicinal pot, not veterinarians.

"If cannabis is going to be available to pet owners to use for their pets it is critically important that we be involved in the discussion, not only to make sure that the medicine is effective, but also to keep these animals safe," Richter said.

Assemblyman Ash Kalra, of San Jose, agrees and has introduced legislation that would allow for vets to prescribe cannabis.

"Right now, there is no guidance for veterinarians as for what they are able to do, so basically they are at risk of losing their license if they discuss cannabis with their patient owners," Kalra said.

Patients, however, feel vets need to be part of the conversation.