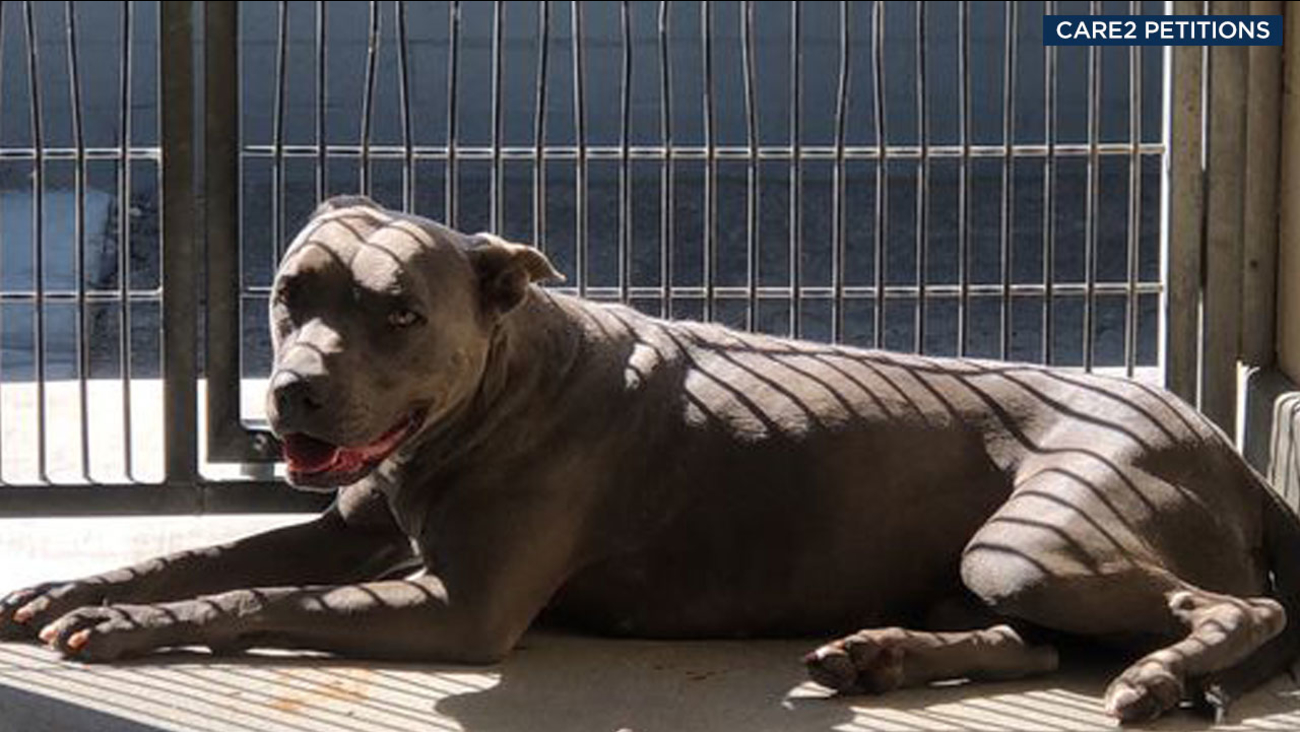 Precious, a 6-year-old pit bull, is shown in an undated photo posted on a petition website to save her. (Care2 Petitions)

Precious is part of a case calling for her to be put down by county animal control officers. A Los Angeles County superior court judge took the case under submission Wednesday and would make a ruling at a later date.

Animal advocates and shelter volunteers are pushing for Precious to live out the rest of her life at a nonprofit sanctuary in Washington. But the dog faces allegations that she and two of her puppies mauled and severely injured a dogsitter.

Precious has been living in a kennel at an animal shelter for more than a year since the attack. It happened on Aug. 9, 2017, but the owners said Precious did not attack the man and instead said her pup Miley bit him. They also claim the dogsitter mistreated the animals.

Authorities said a smoke alarm went off at a motel in the 18000 block of Labin Court in Rowland Heights that day, where the dogs and owners were staying. That's when the victim said Precious "lunged" at his throat. The two other dogs - 3 year old Miley and Grumpy - also attacked him.

But Christine Garcia, the attorney for the dogs' owners, said photos of the man's injuries only show small scrapes on his neck and elbow - the areas where he said Precious and her puppies bit him. A transcript, obtained by City News Service, also showed contradictory testimony on whether a witness at the scene saw two dogs or all three attack the sitter.

All three dogs were then deemed vicious and potentially dangerous to the public by the county, and the designation means the animals can be euthanized.

Owner Melva Calderon said she and her partner paid for an independent assessment of Precious' temperament and was told she could be saved, but not the puppies. She was also told that Precious could not live with them anymore because of the county's public safety concern.

Calderon said she and her partner were living in a motel room when that attack happened after they'd been evicted from their home. Since then, they've paid more than $3,000 in county fees and continue to pay $500 on behalf of Precious.

Miley and Grumpy were put down in May despite Calderon selling her car in an effort to raise enough money for the kennel fees to keep the pups alive while they waited for a court date to appeal the vicious dog designation.

She also admitted that Miley had previously bitten people - almost killing an 11-year-old pug-beagle mix named DJ in March 2017 and injuring two people defending the dog, as well as biting a man in June 2017.

An animal control officer testified that he believed the dogsitter could have been killed if witnesses hadn't come to his rescue. But Garcia said the testimony is hearsay as none of the witnesses to the attack or its aftermath appeared at an earlier hearing. The dogs' owners also failed to appear in court.

Advocates and volunteers at the Baldwin Park Shelter said Precious is gentle and friendly and have gathered more than 2,500 signatures in support of her through an online petition.

Despite being in a kennel for so long, Precious has been gentle and sweet, according to the volunteers who've been taking care of her. Those statements contradict the animal control officer's accounts, who said she was aggressive and barked at him every time he walked by her owner with another dog.

Garcia filed a written order arguing that the county has failed to make legally defensible the case that Precious is vicious and dangerous.