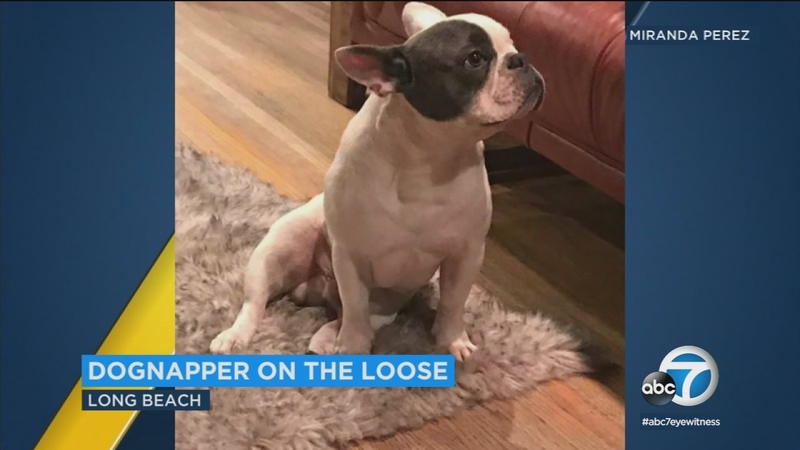 LONG BEACH, Calif. (KABC) -- The owners of a dog named Archie issued a plea to the public Monday to help find their beloved pet after a burglar entered their Long Beach home and stole the dog.

"Give Archie back. I don't really care about anything else, everything else is replaceable, but he's not. Just take him to the dog pound or just turn him in," Kenny Gonzales said.

The 1-year-old French bulldog was stolen by the burglar around 10 a.m. Sunday.

"I've been crying all day yesterday and today. I'm trying not to," Miranda Perez said.

Perez and her boyfriend Gonzales are in tears over the loss of Archie. The couple said they heard footsteps in the living room Sunday. They went to check out what was going on and got the shock of their lives.

"I was in complete shock. Sunday morning, 10 a.m. You'd never think that someone is going to be inside of your house, 20 feet away from where I'm lying in bed," Gonzales said.

Gonzales said he dashed into his bedroom to grab his gun when the guy took off, stealing a few carpentry tools and nabbing Archie before heading into a getaway car.

The couple have surveillance video from a neighbor that shows a car pulling up to their home and a man getting out. Perez said it's the same man who entered their backyard and slipped into their home through the sliding glass door.

"Watching the video, it looks like he's in familiar territory. He's not hesitant about anything. He just walked in," Perez said.

The vehicle seen in the video was later located in San Pedro. It had been reported stolen.

Perez and Gonzales said they can replace the drills and other tools, but they want the bandit to return Archie, who is like their child.

"Give me my son back and how dare you," Perez said.

The couple said the bandit may have targeted their home thinking it was empty because it's under a complete renovation, but that's not the case.