Mountain lion killed in Fontana neighborhood after it charged at officers 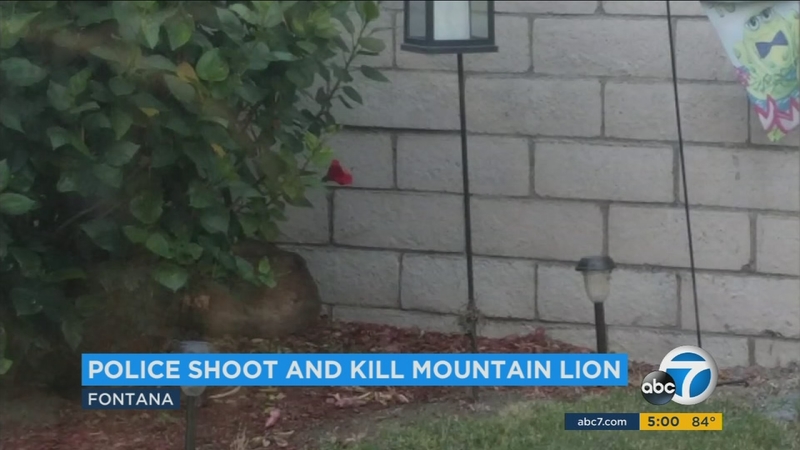 FONTANA, Calif. (KABC) -- A mountain lion was killed after it was found in the back of a Fontana home Tuesday morning.

Fontana police received a call from a resident about a mountain lion in their backyard at a home in the 7900 block of Frontenac Court.

That homeowner, Yvonne Martin, spotted it sleeping behind a bush.

"I told my husband, 'something's out here,' and it wasn't moving and he said, 'I think that's a mountain lion,'" she said.

Animal services officers had been looking for a mountain lion in the same area, which has parks and schools, for the last two days. The lion had killed animals at two separate homes.

Officers said the lion was spotted during the day near children and adults. When they responded to the residence, they found it toward the back of the house.

The animal charged at the officers, which resulted in them opening fire.

"He came around the bush and then he started, he like pranced at the one cop that shot him and then he went over the fence," Martin said.

Authorities created a perimeter and searched for the animal. Resident Zondra Jones said the whole area was blocked off and police were telling people to stay in their homes.

Then she heard another round of gunfire.

Amanda Padilla also heard those gunshots and captured video from her home of the chaotic scene.

Still, many pet owners in the area can now breathe a sigh of relief that the mountain lion is gone.

"We hate that they had to shoot it, but it saved my dog," Jones said.
Report a correction or typo
Related topics:
pets & animalsfontanasan bernardino countymountain lion sightingsafetywild animalspetshootingneighborhood
Copyright © 2021 KABC-TV. All Rights Reserved.
More Videos
From CNN Newsource affiliates
TOP STORIES