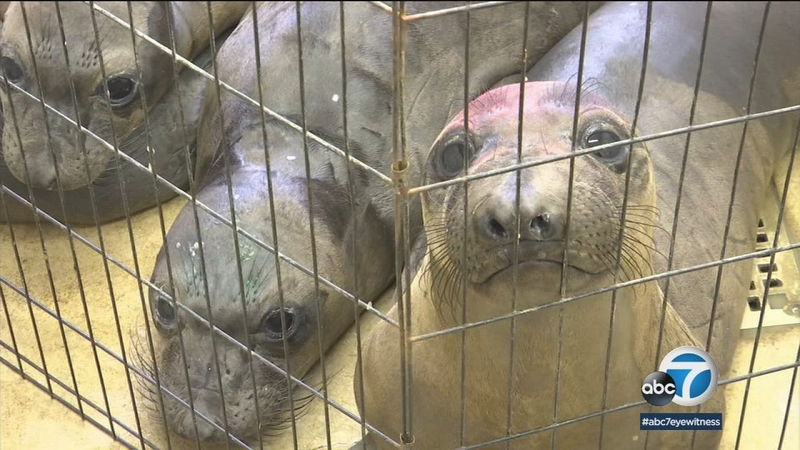 LAGUNA BEACH, Calif. (KABC) -- It's not uncommon to visit the Pacific Marine Mammal Center in Laguna Beach this time of year and see an elephant seal. But, the center has rescued 19 pups this year, two of which have died.

"These elephant seals, their rookeries are normally in the central coast of California, San Simeon, Hearst castle area. So, for these animals to be stranding this far south and in this quantity is a little bit alarming to us," said Krysta Higuchi, with the Pacific Marine Mammal Center.

The pups will stay at the center for a few months and nursed back to health by staff.

"Elephant seals are birthed at about 75 pounds. They're normally born in the January-February time range. In their first four weeks of life, they generally should double that weight. We're seeing animals come in under birthweight, very weak, very emaciated, very lethargic," Higuchi said.

The center is responsible for a 52-mile stretch of coastline from San Onofre to Seal Beach. Calls come in from the public or lifeguards when the seals wash up on shore.

The average used to be 20 elephant seals a year, but in 2017 the marine mammal center saw 52 and they could pass that figure this year. The center has partnered with NOAA to figure out why this is happening.

"The animals are so weak that they get caught in the current and just drift far south. They can't fight the current. They're not strong enough and that could be a variety of reasons. Maybe they were weened a little bit too early. Mom wandered off," Higuchi said.