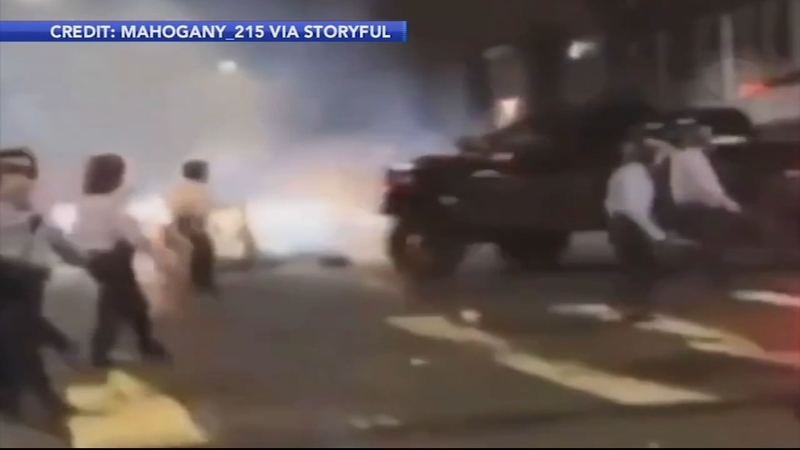 PHILADELPHIA -- At least 90 people have been arrested and at least 30 police officers have been injured as tensions erupted in West Philadelphia after police shot and killed a man armed with a knife, according to officials.

Officials said most of the injuries to officers that occurred overnight are reported to be the result of being struck by projectiles, such as bricks and rocks.

One officer, however, a 56-year-old Philadelphia Police Sergeant, was struck by a pickup truck in the area of 52nd and Walnut streets around 12:45 a.m. Tuesday. Officials said she sustained a broken leg and various other injuries. She has been admitted to the hospital in stable condition.

The 29 other officers have reportedly been treated and released from area hospitals.

Looting was captured on on video Tuesday morning. Chopper 6 was overhead as people could be seen running from a Foot Locker store.
EMBED More News Videos

A Foot Locker is looted in the aftermath of the fatal shooting of Walter Wallace in West Philadelphia who police say would not drop his knife.

The shooting of Wallace happened around 3:50 p.m. Monday when officers responded to a domestic call along the 6100 block of Locust Street.

Police shot and killed a man on a West Philadelphia street Monday afternoon after yelling at him to drop his knife.

The names of the officers who fired the shots have not been disclosed. Police said both officers were wearing body cameras and were taken off street duty pending the investigation.
Hours after the shooting, a group broke windows and vandalized vehicles along 52nd and Pine streets in West Philadelphia.

The group is also believed to be responsible for broken windows at a number of buildings in University City, including a police station and a Starbucks.

In West Philadelphia, dumpsters were set on fire as police struggled to contain the crowds late Monday night. More than a dozen officers, many with batons in hand, formed a line as they ran down 52nd Street chasing protesters away from the main thoroughfare.

Destruction is being reported in Philadelphia after police shoot and kill a man on Monday afternoon.

As of Tuesday afternoon, police said dozens of people have been arrested in connection to the overnight unrest including:

Philadelphia Police Commissioner Danielle Outlaw said the shooting video raises questions, but she assured the community that a full investigation is underway.

"I have directed the Officer Involved Shooting Investigation Unit to begin its investigation. I recognize that the video of the incident raises many questions. Residents have my assurance that those questions will be fully addressed by the investigation. While at the scene this evening, I heard and felt the anger of the community. Everyone involved will forever be impacted. I will be leaning on what the investigation gleans to answer the many unanswered questions that exist. I also plan to join the Mayor in meeting with members of the community and members of Mr. Wallace's family to hear their concerns as soon as it can be scheduled."
Report a correction or typo
Related topics:
west philadelphiaphiladelphiapolice involved shootingcrimefatal shootingvandalism
Copyright © 2022 WPVI-TV. All Rights Reserved.
TOP STORIES
Website for free COVID tests is here. How does it work?
Suspect identified in murder of 24-year-old woman in Hancock Park
Family seeks justice for teen found dead along freeway in South LA
Gov. Gavin Newsom offers college students $10,000 for public service
Felony charges are 1st in a fatal crash involving Autopilot
Fashion icon André Leon Talley dies at 73
Some issues arise on 1st day of USPS free COVID tests
Show More
Airlines worldwide rush to change flights over US 5G problems
Giuliani among Trump allies subpoenaed by Jan. 6 panel
Cracker Barrel to pay $9.4M after man was served glass with chemical
How an LA Rams internship helped this student tackle homelessness
New York AG says Trump's company misled banks, tax officials
More TOP STORIES News