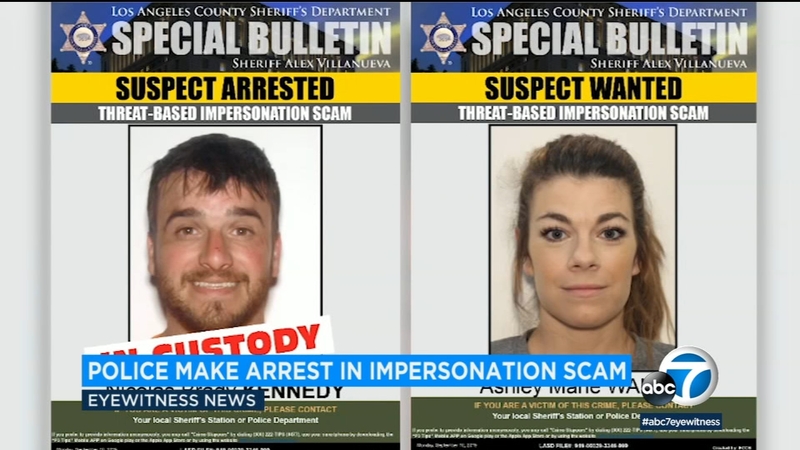 A man was taken into custody and a woman was being sought for a phone scam in which they allegedly pretended to be from government agencies and threatened victims with arrest if they didn't pay them.

The Georgia-based suspects have been charged by the Los Angeles County District Attorney's office with counts of extortion or attempted extortion, Nelson said.

Kennedy and Walker would threaten mostly elderly victims over the phone with arrest, unless they bought gift cards and gave the numbers to the scammers. Some respondents were told there was an arrest warrant for them for failure to report for jury service.

"You should never take a call asking for money from a government agency. I know for a fact that the IRS won't call you and I can certainly tell you that the L.A. County Sherriff's Department will never call you and ask you to provide money in the form of gift cards," Nelson said.

An investigation determined Kennedy used a sophisticated set of techniques to hide his location and identity, including telephone number spoofs and the use of names of real LASD personnel, the department said.

Six known victims paid the scammers a total of more than $16,000. Three other potential victims did not pay, even after being pressured, Nelson said.

"The main focus is to make sure we try to avoid additional victims," he said. "It's much better if we're able to warn the public of the danger, to begin with."

Detectives warned people to be more vigilant about who they give sensitive information to.

Investigators believe there are other suspects involved in the scam and they are urging other possible victims to contact the sheriff's department.